A highly customized beam rifle designed with an energy condenser, a single shot from the beam magnum is equal in power to 4 normal beam rifle shots but it uses up an entire E-pac. Each of the beam magnum's magazine is loaded with 5 E-pacs, allowing a total of five shots before a new magazine is needed. The Banshee Norn can carry spare magazines on its rear skirt armor.

A new attachment added to Banshee Norn's Beam Magnum in a manner reminiscent of the RX-78-2 Gundam's Super Napalm. Each barrel of the launcher houses a different weapon. A spare launcher can be stored on the rear skirt.

Stored in the Revolving Launcher, it is a short beam saber designed to catch enemy beam sabers, allowing the pilot to quickly counter when there is no time to draw out his main beam saber, or when the Banshee Norn is in a tight situation when it lost its Beam Sabers. Reminiscent of the beam jutte function of the beam rifles used by RX-78GP01 Gundam "Zephyranthes", RX-78GP03S Gundam "Dendrobium Stamen" etc.

A set of four small missiles fired from the Revolving Launcher.[1]

Armor-piercing shells that release a blinding flash upon explosion. A set of four shells are fired from the Revolving Launcher and together they can destroy a mobile suit's shield.

Numerous small bombs stored in a bomb case fired from the Revolving Launcher. The case breaks apart soon after launch, releasing the bombs that will float towards the targets and explode upon impact.

The Armed Armor DE (Defense-Extension)[1] is the normal I-Field-equipped shield used by the Banshee with additional parts containing more psycoframe, six thrusters (four on top and two at the bottom) and a mega cannon. The mega cannon provides the Banshee Norn with another ranged weaponry, while the thrusters grant the suit speed comparable to a Base Jabber when the Armed Armor DE is mounted on the Armed Armor XC. It can also be used as a makeshift melee weapon with significant reach.

The Armed Armor XC (Xeno-Connect)[1] is an add-on backpack unit that enhances generator output while using the head antenna to detect Psycommu waves from incoming enemy suits, greatly enhancing the pilot's affinity with the machine and allowing a non-Newtype pilot to activate the NT-D system. The development of this equipment was deeply connected to that of the Psycommu assist system called n_i_t_r_o. The Banshee Norn's backpack beam sabers are stored in the Armed Armor XC.

Note: Much of the Unicorn Gundam Banshee Norn's history can be found on Riddhe Marcenas's page.

Both Unicorns take aim together 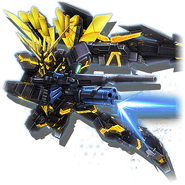 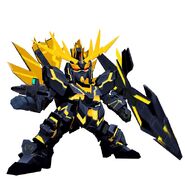 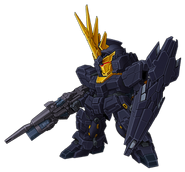 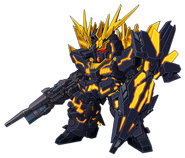 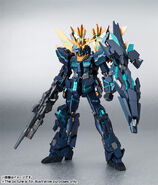 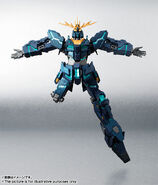 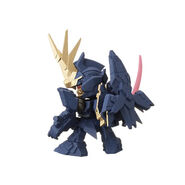 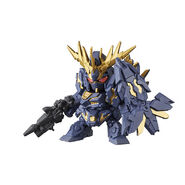 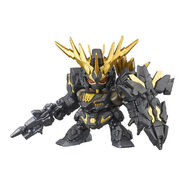 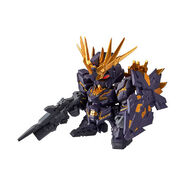 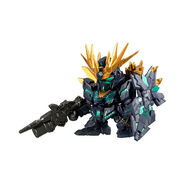