A large fighting vehicle officially adopted by the Earth Federation Forces in U.C. 0065. Equipped with two large-caliber cannons for bombardment, it also has quadruple autocannons in its manipulators, which are capable of both anti-ground and anti-air combat. This machine was born from concepts far beyond those of traditional tanks. Thanks to this breakthrough in large tank design, it has established an overwhelming presence ever since its deployment in the colonies began. It is used to maintain public order.[1].

In U.C. 0068, one unit was used by Crowley and two rogue soldiers to transport Casval and Artesia to safety. When military officers led by the Zabi siblings tried to stop them, Casval furiously takes over the Guntank and proceeded to eliminate almost all of the opposing forces until Artesia helps him regain his senses. Said Guntank was evacuated as a decoy before its passengers escaped [2]. 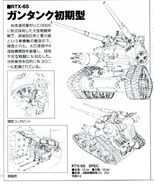