The RTX-440 is a modification of the anti-MS tank RTX-44. The machine cannons equipped on left manipulator are an improved 2-tube model which has longer range than the older 4-tube model on the original Guntank. In addition to the bop gun and 220mm cannon, the RTX-440 can be armed with numerous optional weapons including Multi Launch Rocket System (MLRS), rocket launchers, heavy mines and a flamethrower.

The RTX-440 have a very limited degree of flexibility of its torso - unlike the fixed torso of its predecessor, the Guntank - but rigid enough to make it hard to shoot a moving target with its main cannon. In addition, the RTX-440 has a crude transformation mechanism known as "Asssault Gun Mode" that allows it to deploy the secondary caterpillar treads and "crouch" down in similar fashion to a conventional tank. This mode allows the RTX-440 to approach its target with greater speed.

A 220mm Cannon is mounted on RTX-440 Guntank's right torso. The cannon can be used for long range artillery sniping as well as close-range anti-MS attack. For precision artillery attacks the Cannon is aimed via a movable optical sensor unit being mounted on top of Guntank's torso.

A 4-tube 30mm Bop Machine Gun is mounted in the Guntank's right manipulator with an ammunition feed system. As ranged weapons the rapid-firing machine guns are capable of destroying HT-01B Magella Attack tanks, and are also effective against Zeon's MS in close-quarter situation.

The left arm of RTX-440 features a 2-tube 30mm Bop machine cannons integrated with a large flamethrower for mid-range attack.

The large flamethrower is mounted on top of 2-tube Bob Gun. It is a mechanical incendiary device which can project a long, controllable stream of fire to incinerate targets such as infrastructures, infantry units and combat vehicles. The flamethrower is fueled by two large external fuel tanks which are mounted at the back of Guntank's torso and can be disposed once the fuel is used up.

Mounted on the side of Guntank's main caterpillar units is a rectangular Rocket Launcher which contains a total of 56 unguided, fin-stabilized rockets. Comparing to guided missiles, the rockets' relative inaccuracies are more than made up with a rapidly-fired volley for inflicting large-scale damage, and are particularly effective against mobile weapons in close range.

Mounted on the top-side of Guntank's main caterpillar units, the MLRS carries multi-tube missiles which can be launched at elevated angles for long-range bombardment. The missiles can be fired at a set time interval, or all of them can be launched at once to inflict serious damage to an area.

A total of four Heavy Mines can be carried on each side of Guntank's main caterpillar units. The Heavy Mine is a scaled-up explosive device against large mobile weapons such as MS or large combat vehicles. They trigger massive explosion upon contact. The Mines can be dropped individually or all at once to repel/destroy enemies in hot pursuit.

The RTX-440 Guntank is equipped with numerous smoke dischargers on top of its torso and movable sensor unit. The smoke discharger is a defensive feature used to visually blind the opponent while their sensors are jammed by Minovsky particles. This allows the Guntank an opportunity to escape or to ambush the enemy.

As the last line of self-defense, the RTX-440 Guntank is equipped with "Emergency Destruction System" which can be triggered by its pilot to self-detonate the Guntank within a preset time interval. The RTX-440 was built to self-detonate should the pilot choose to. A detonator is placed within the cockpit and if a dire situation arrives, the pilot can activate the system and destroy the Guntank. The system was designed to overload its power systems and has enough explosive power to destroy surrounding targets. It's a last-ditch tactic if the pilot is incapable of protecting the Guntank, while not allowing it to fall into enemy hands. It can also be used as one large explosive device to eradicate large targets.

Despite its data being in the hands of the Zeon, the three RTX-440 Guntanks that had been produced before the project was canceled. They were fielded by the Federation Forces to participate in Operation Odessa in a desperate attempt to break through Zeon defense. The pilots were three convicts who had been promised amnesty from their crimes, including Arleen Nazon who technically hadn't committed any crimes except for being the lover to a traitor.

The Guntanks were assigned as vanguard units during Operation Odessa to penetrate enemy lines and to destroy a Dabude-class battleship that was causing severe losses to the newly reorganized 44th Independent Brigade Composite. The Guntank Crews managed to succeed in their mission, at the cost of two of the machines and their pilots. The surviving Guntank, piloted by Arleen Nazon who spotted a second Dabude-class land battleship. She was ordered by Maj. Michael Colmatta not to attack it. However, she had a premonition which told her that Clyde Bettany was on the ship. Recklessly she charges the Guntank into enemy lines, destroying several enemy mobile suits in the process. Due of her recklessness, the Guntank was ruined by the time it reached the Dabude. In a last ditch effort to exact revenge, she activated the Guntank's Emergency Destruction System. The resulting explosion destroyed both the Guntank and the Dabude-class. 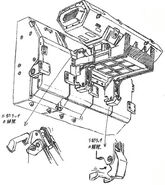 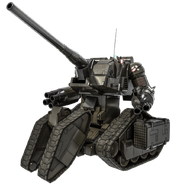 Retrieved from "https://gundam.fandom.com/wiki/RTX-440_Ground_Assault_Type_Guntank?oldid=496689"
Community content is available under CC-BY-SA unless otherwise noted.