RS-82B-R GM II Custom is a variant of the GM II featured in the side story novel Tyrant Sword of Neofalia, and was designed by Kazumi Fujita.

The RS-82B-R GM II Custom is a high-mobility variant of the GM II. It was used as the basis for the RX-178-X0 Prototype Gundam Mk-II and the RX-86 Sam. Originally developed to replace the unfavorable RS-81 Nemo, it went on to become the leading Federation mobile suit of its time. Its performance is said to rival the famed RX-78 Gundam. The R type was re-designed and heavily modified for the Borderland Security Defense Fleet by upgrading the search capabilities and mobility.

The main weapon of GM II Custom, powered by a rechargeable energy cap. The particle beam fired from a beam rifle can penetrate most armor not treated with specific counter-measures. This model feature a stronger output and better performance than a standard RMS-179 GM II's Beam Rifle

The standard close range armament for most Federation mobile suits. The beam saber is a small device held in the mobile suit's hands when operated and is powered by a rechargeable energy capacitor. Emitting a blade-shaped beam, it can through any armor not treated with anti-beam coating. The GM II custom has one beam saber stored on its backpack.

A basic arm-mounted defense armament for many Federation mobile suits. The shield is a thick sheet of armor designed to take severe punishment that would normally destroy a mobile suit. Shields are also treated with an anti-beam coating to withstand several beam shots before the coating wears off. Typically, physical shields can only take so much damage before they succumb to the pressure and break.

The GM II Custom's shield possesses minor offensive capabilities as a Grenade Launcher was mounted on it.

A standard armament of the mobile suits descended from the Earth Federation Forces's RX series. These head mounted shell firing weapons have high-rate of fire, but have little power and are generally ineffective against mobile suits; however, they can damage lightly armored areas such as the sensors. They are ideal for shooting down small, lightly armored targets such as missiles or attack vehicles.

Due to the powerful ability of the super Newtype, Keith McGreggor, the Earth Federation Forces decided to give him the RS-82B-R GM II Custom. It was heavily modified for the Borderland Security Defense Fleet by upgrading the search capabilities and mobility. It was abandoned by Keith for the more powerful SX-NFR-01SES Tyrant Sword. 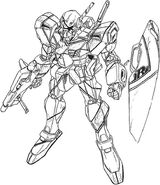 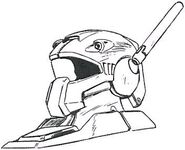 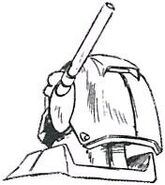 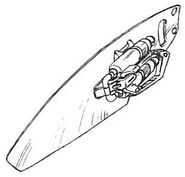 Retrieved from "https://gundam.fandom.com/wiki/RS-82B-R_GM_II_Custom?oldid=439152"
Community content is available under CC-BY-SA unless otherwise noted.