The RRf-06 Zanny is a mobile suit that first appeared in the Gundam Tactics Mobility Fleet 0079 video game.

The RRf-06 Zanny is one of the first mobile suits developed by the Earth Federation Forces using captured MS-06 Zaku IIs. In contrast with the mobile suits developed under the Project V which had a large budget, the Zanny's development suffered from technical issues and little funding. The result was a shoddy design with poor usability and high failure rates during tests due to malfunctions. Thus, the Zanny was mainly used to develop Federation MS, and train early Federation MS pilots.

Mounted in the head, the pair of vulcan guns are typically used for intercepting missiles, destroying mobile suit sensors and the likes.

A modified version of the RB-79 Ball's low-recoil cannon, it has been reconfigured to an handheld weapon for MS use. 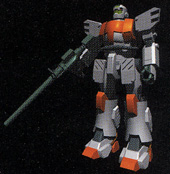 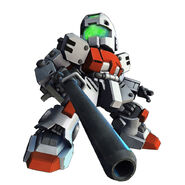 Retrieved from "https://gundam.fandom.com/wiki/RRf-06_Zanny?oldid=453934"
Community content is available under CC-BY-SA unless otherwise noted.