While the RX-75 Guntank performed poorly as a mobile suit, its performance was very high for an armored fighting vehicle. Therefore, the Earth Federation Ground Force reinvented it as the RMV-1 Guntank II, a fire support ground unit designed to cover the assault of infantry and mobile suit units.[1] The Guntank II has a more tank-like appearance than its predecessor and due to the removal of the Core Block System, its torso is capable of independently rotating. It was expected to be the successor to the Type 61 Tank and was also used in defending military bases. Depending on sources, the Guntank II is said to be operated by a crew of three (one at the top and two at the bottom),[2] or jointly by a pilot and a gunner.[3]

In Kazuhisa Kondo's manga "Mobile Suit Gundam 0079," it was developed as a firepower-enhanced version of the RGT-76 Guntank I. It is considered to be one size larger than the prototype, equipped with 200mm mega cannons on both shoulders and triple rocket launchers on both arms. It is commonly known as the "Mammut".

Mounted on the upper part of the torso, the pair of cannons serve as the machine's main weapon. As the machine's torso rotates independently, they possess a wider firing arc than the main cannons of the original Guntank.

Equipped on the right arm.

Equipped on the left arm.

A machine gun mounted on the bottom right side. Mainly used for anti-personnel purposes.

Mounted on each side of the waist, these dischargers can launch smoke rounds, enshrouding the Guntank II in an obscuring layer of smoke, making it difficult for the enemy to target.

According to various sources, the Guntank II entered mass production either after the end of the One Year War[1] or in September, U.C. 0079, after Matilda Ajan delivered the combat data of the White Base team back to Jaburo.[4] The Guntank II was built in limited numbers, with only six units constructed and assigned to North America and Central Asia before the end of the war,[2] none of which saw combat.[5]

The Guntank II remained in service for almost two decades, despite the fact that advances in mobile suit technology have rendered it obsolete. In U.C. 0087, two units were seen defending the Jaburo base during the AEUG's attack and were easily defeated. In U.C. 0094, one unit was captured and operated by Zeon Remnants, it was destroyed by Braier Ryude of the Fresberg Corps piloting a Mass Production Type ZZ Gundam. In U.C. 0096, another unit was seen assisting in the defense of the Torrington Base alongside two Guncannon Detectors against invading Zeon Remnants and was destroyed by a Galluss-K. 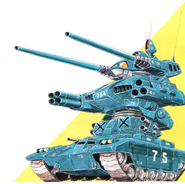 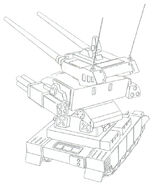 As seen on Gundam Unicorn OVA 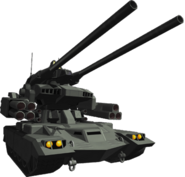 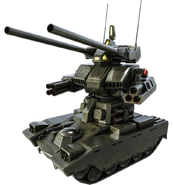 Guntank II (centre right) as seen on Gundam: After Jaburo