The Febral is a Newtype-use mobile suit developed by the Space Revolutionary Army during the 7th Space War. Since it was developed for space combat, it has no legs, instead they are replaced by a thruster-equipped lower body shaped like upside-down flower buds. Furthermore, there are no manipulators in the arms, and the part corresponding to the fingers are fixed beam cannons. It is also armed with an unknown number of Bits, which are remote-controlled Newtype-use weaponry. The Febral is twice as tall as a standard mobile suit, and its appearance is similar to that of mobile armor. Its cockpit is located in the head, which can be detached to function as an escape pod in an emergency.

Five beam cannons are built into each forearm, they are also called "Internal Beam Rifle".

An all-range attack, remote-controlled terminal operated the Flash System. The Febral is equipped with an unknown number of Bits and they are launched from a container in the lower half of its body. In the manga "After War Gundam X: Newtype Warrior Jamil Neate", the Bits are used to battle the FX-9900 GX-Bits.

A system that allows a Newtype pilot to control remote weaponry known as "Bits" with their brainwaves.

The head of the Febral contained its cockpit and can detach from the main body to serve as an escape pod.

One known Febral was piloted by the SRA Newtype ace pilot Lancerow Dawell, the rival of the United Nations Earth (UNE) Newtype ace pilot Jamil Neate, who engaged Jamil's GX-9900 Gundam X during the mass colony drop by the SRA that occurred at the final stages of the 7th Space War. Sometime during the fierce battle between the two, Lancerow managed to destroy the Gundam X's left arm. The battle drew to a close when Jamil managed to destroy Lancerow's Febral with a beam rifle shot, while Lancerow managed to fire a final shot with his Febral's beam cannon which destroyed the Gundam X's head, crippling it. Despite his Febral being destroyed, Lancerow managed to escape in the mobile suit's detachable head. Although both pilots escaped with their lives, they lost their Newtype abilities after this battle. 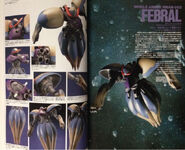