The RMS-192M Zaku Mariner is the Earth Federation's production-line version of the Principality of Zeon's MS-06M (MSM-01) Zaku Marine Type M-1 Prototype which was tested during the One Year War. Developed as an improved version of the MS-06M, it featured a large hydrojet thruster backpack that provided propulsion, which could also be jettisoned so it would not interfere with the mobile suit's mobility or combat effectiveness on land. Like previous Earth Federation amphibious mobile suits, the Zaku Mariner's armament consisted mostly of missiles and other explosive weaponry including a total of 14 SUBROC (SUBmarine ROCket) launchers in its shoulders and backpack as well as a handheld missile launcher and a magnetic harken for melee combat. This armament was the suit's greatest strength as well as its greatest weakness as it could cause widespread destruction to just about any target until, of course, its weapons were used up leaving it with only the magnetic harken to defend itself, leaving it in a very dangerous position as the harken could not destroy or even damage a mobile suit by itself. Another weakness it shared with previous EFF amphibious mobile suits, namely the Aqua GM, is its lack of beam weapons.

Two sets of rocket launchers with three exit ports each for a total of six, located in the shoulders. In combat, the mariner has been known to fire these weapons upon exiting the water to both surprise the enemy and prevent them from hindering its landing.

Two sets of rocket launchers with four exit ports each for a total of eight, located on the backpack. One tactic in using this weapon is to raise the backpack above water, fire the rockets, and take advantage of the enemy's surprise to either continue the attack or re-submerge and retreat.

Mounted on the left arm and the only melee weapon on the mariner. It comes in the form of a cable that is launched at an enemy mobile suit, magnetically attaches to it, and electrocutes it (similar to the Gouf Custom's heat wire) long enough for the mariner to attack with its other weapons.

A handheld weapon used exclusively by the Zaku Mariner. Intended to give it decent ranged combat ability on land, this weapon proved to be very powerful. Unfortunately, the weapon also has a very limited amount of ammunition.

The Zaku Mariner is a mobile suit designed for amphibious combat. Although based upon the old MSM-01 Zaku Marine Type created by the Principality of Zeon, this suit is an improved version created by the Earth Federation Forces. Ironically, the EFF was never able to use these suits as they were captured by the Neo Zeon forces during the First Neo Zeon War, when their forces invaded Earth in UC 0088. A Team of Zaku Mariners were used on an attack on the Argama after the ship had descended to Earth.[1]

In UC 0096, at least two of these suits were used by Zeon remnants to attack the Federation's Torrington Base. Two of these units would later be destroyed by the RX-160S Byarlant Custom. 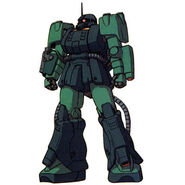