The RMS-179 GM II Semi-Striker is a custom RMS-179 GM II created at the Torrington Base by reusing spare parts from existing machines, thus its model number is unchanged from the original GM II. Its name "Semi Striker" came about due to its appearance. It shares the same performance, power output, acceleration, and sensor range as the GM II, but its OS was rewritten to specialize in close-combat.[1]

The standard close range armament for most Federation mobile suits, the GM II Semi-Striker has one beam saber stored on its backpack. The beam saber is a small device held in the mobile suit's hands when operated and is powered by a rechargeable energy capacitor. The beam saber emits a blade of plasma contained by an I-Field and can cut through most armor not treated with anti-beam coating.

A shield mounted on the left forearm, it is made of gundarium alloy. Due to its small size, the shield is extremely maneuverable and effective in close combat.

In UC 0096, during the assault of Torrington Base, a GM II Semi-Striker was deployed and seen battling against the MS-08TX/S Efreet Schneid in close quarters combat, however it was quickly dispatched by the Efreet Schneid. 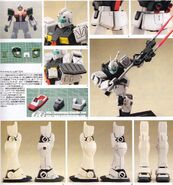 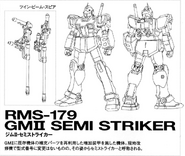 Retrieved from "https://gundam.fandom.com/wiki/RMS-179_GM_II_Semi-Striker?oldid=456726"
Community content is available under CC-BY-SA unless otherwise noted.