The RMS-154 Refined Barzam (also known as Barzam Custom) is a mass-produced general purpose mobile suit. It was first featured in the photo-novel Gundam Sentinel.

The armament of the Refined Barzam was largely the same as the original RMS-154 Barzam's. Its only fixed armaments were a pair of beam sabers, although they are now stored on the backpack as opposed to being stored in the forearms. The Refined Barzam also had its own beam rifle with an attached grenade launcher, and could still be equipped with the head vulcan pods originally designed for the RX-178 Gundam Mk-II as well as any other weapons the Gundam Mk-II could wield.

The beam saber is a small device held in the mobile suit's hands when operated and is powered by a rechargeable energy capacitor. It can cut through most armor not treated with anti-beam coating. The Refined Barzam has two beam sabers stored in backpack that is taken from the RX-178 Gundam Mk-II's design.

Like the Gundam MK-II, the Refined Barzam does not have vulcan guns mounted in its head and instead uses an external head-mounted device containing the vulcan guns. The vulcan guns are shell firing weapons with a high-rate of fire, but little power and are generally ineffective against mobile suits; however, they can damage lightly armored areas such as the sensors. They are ideal for shooting down small, lightly armored targets such as missiles, small vehicles, etc.

A standard hand carried ranged beam weapon is the beam rifle. The beam rifle used by the Refined Barzam is similar to the one used by the Gundam MK-II, but has an integrated grenade launcher under its barrel for more firepower.

For heavy firepower, the Refined Barzam could carry a large hyper bazooka, which was clip-fed and capable of carrying seven rounds per clip plus 1 round in its chamber. When not in use, the bazooka could be stored on the rear waist armor.

A basic defense armament for many Federation mobile suits. The shield is a thick sheet of armor designed to take severe punishment that would normally destroy a mobile suit. It is also treated with an anti-beam coating to withstand several beam shots before the coating wears off. Typically physical shields can only take so much damage before they succumb to the pressure and break.

Although the original Barzam was deemed too conventional, the Earth Federation Space Forces stationed at the Pezun asteroid base had a next-generation Barzam model in their ranks. The Refined Barzam was a far step up from the original Barzam design, and outwardly it had much more in common with the Gundam Mk-II than its predecessor.

The Refined Barzam proved to be an excellent mobile suit for its time, but they were still produced only in small quantities. In the final weeks of the Gryps Conflict, in UC 0088, a pro-Titans military offshoot called the New Desides staged a revolt at the Pezun asteroid to depose the AEUG-sympathetic leadership of the base. The Refined Barzams were the Federation Forces's first line of defense at Pezun, but they were all overwhelmed and destroyed by the New Desides's superior RMS-141 Xeku Eins mobile suits and Pezun quickly fell to the New Desides. 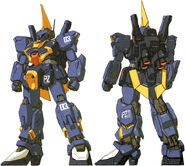 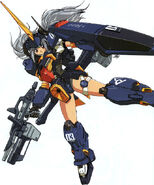 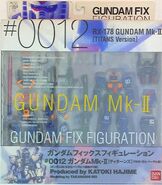 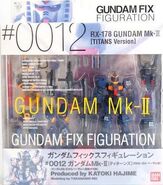 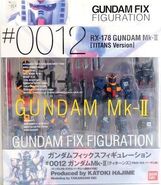 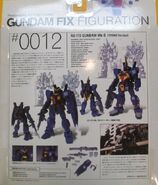 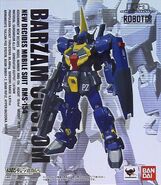 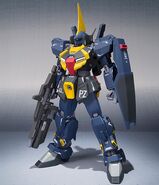 Information and specification from Gundam Sentinel

Retrieved from "https://gundam.fandom.com/wiki/RMS-154_Refined_Barzam?oldid=496677"
Community content is available under CC-BY-SA unless otherwise noted.