The RMS-154 Barzam is a mass-produced general purpose mobile suit. It was featured in Mobile Suit Zeta Gundam and the photo-novel Advance of Zeta: The Flag of Titans.

The RMS-154 Barzam was created by the Titans as a mass production type model to replace the RMS-179 GM II. Based on the RX-178 Gundam Mk-II, the Barzam was developed at the New Guinea Base and shares parts with existing MS to ensure ease of production. Due to its unique look, the Barzam looks small, but is actually taller than most MS. Its waist and backpack are integrated into the torso, with legs extending from below this integrated torso. It features a Zeon-style mono-eye sensor in the head and could be equipped with any of the handheld weaponry available to the GM II, and RMS-106 Hizack, as well as its own unique beam rifle. It also featured two beam sabers stored in its forearms and could be equipped with head-mounted double-vulcan pods.

Like the Gundam MK-II, the Barzam does not have vulcan guns mounted in its head and instead uses an external head-mounted device containing the vulcan guns. The vulcan guns are shell firing weapons with high-rate of fire, but little power and are generally ineffective against mobile suits. However, they can damage lightly armored areas such as the sensors. They are ideal for shooting down small, lightly armored targets such as missiles, small vehicles, etc.

A uniquely shaped beam rifle utilized by the Barzam, it has a feature that allows it to connect to the Barzam's arm when in use. Unlike most beam rifle of the period, it is not powered by an energy pack, and may potentially be powered by the MS itself. The beam rifle can also holster a grenade launcher to its side.

A grenade launcher could be fitted on the side of the beam rifle or used on its own. These grenades weren't very effective against large ships, but were ideal mid-range anti-mobile suit weapons.

The beam saber is a small device held in the mobile suit's hands when operated and is powered by a rechargeable energy capacitor. Emitting a blade-shaped beam, it can cut through most armor not treated with anti-beam coating. The Barzam has two beam sabers, one stored in each forearm.

The same beam rifle used by the Marasai and Hizack. It is powered by a rechargeable energy cap and capable of firing concentrated mega particles, a shot can damage most armor not treated to resist beam attacks.

The shield is a thick sheet of armor designed to take severe punishment that would normally destroy a mobile suit. Shields are also treated with an anti-beam coating to withstand several beam shots before the coating wears off. Typically physical shields can only take so much damage before they succumb to the pressure and break.

In UC 0087, as the Gryps War dragged on the Titans planned to develop a new mass-production mobile suit to replace their outdated RMS-179 GM II and RMS-106 Hizack. One of the designs submitted and approved was that of the RMS-154 Barzam. Due to its ease of production, a sizable number was produced in a short period of time and deployed on earth and in space. However, the Titans' attempt to replace their outdated mobile suits with the Barzam was disrupted when the Earth Federation choose to disown the elite military unit. Even with the subsequent disbandment of the Titans and end of the war, the Barzam and its variants were still deployed by other factions. 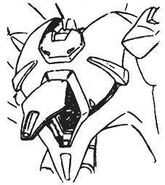 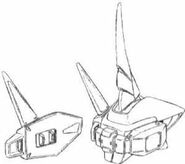 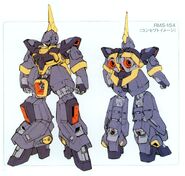 On Base Jabber (cameo in GBFT) 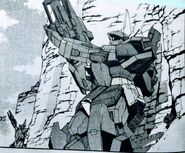 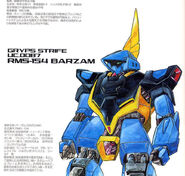 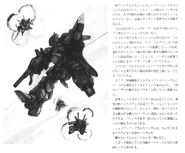 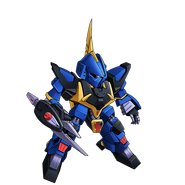 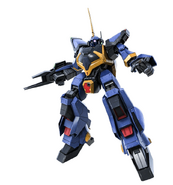 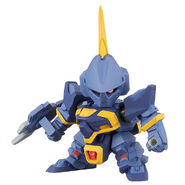