The RMS-154R (01) Barzam Commander Custom is a variant of the RMS-154 Barzam from The Star of Zeon - Mobile Suit in Action.

The RMS-154 Barzam was a mobile suit originally developed as a general-purpose production machine with variable mobility that could compete with mobile armors in space combat. The Barzam Commander Custom was a prototype machine that had been fabricated as part of a canceled experimental project. It was designed as a high-speed hover unit fitted with equipment and powerful sensors for use by commanders. It was piloted by Colonel Russ Hannibal of the "Dragoon 13" independent squadron. 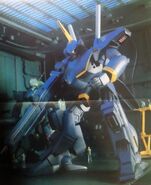 Retrieved from "https://gundam.fandom.com/wiki/RMS-154R_(01)_Barzam_Commander_Custom?oldid=348602"
Community content is available under CC-BY-SA unless otherwise noted.