The RMS-142 Xeku Zwei was a prototype artillery mobile suit fielded by the New Desides and was featured in the photo-novel Gundam Sentinel.

The RMS-142 Xeku Zwei was an incredibly powerful mobile suit piloted by New Desides pilot Josh Offshore. While it is unknown whether the Xeku Zwei ("Zwei" being the German word for "two") is a brand new model mobile suit all-together, or just a very extensively modified RMS-141 Xeku Eins, the Xeku Zwei still manages to be far superior to the Xeku Eins. But the Xeku Zwei did not achieve its performance by incorporating more advanced technology, instead it did so by just adding excessive amounts of many basic components.

The multi-purpose latch and mount system on the shoulders of the Xeku Zwei gives it twice the carrying capacity of the Xeku Eins series, and additional hardpoints and storage racks are distributed across its body. It is also equipped with four sub arms to hold and support all its extra weapons. With vast amounts of extra armor all over its body, the Xeku Zwei is very well protected. But all this extra armor is incredibly bulky and heavy, as a result, the Xeku Zwei is over double the weight of the Xeku Eins. To overcome the maneuverability and speed issues the heavy armor presents, the Xeku Zwei is equipped with large numbers of thruster arrays, verniers and apogee motors, giving it remarkably good speed and acceleration for its size.

To deal with Task Force Alpha's advanced mobile suit forces, the Xeku Zwei was incredibly heavily armed. Installed in the front skirt armor, the Xeku Zwei had three micro missile pods, each holding eighteen missiles. Six Sturm Faust rocket-propelled grenades (nicknamed "clubs") were stored in the sides of the top backpack booster unit. A powerful and highly accurate beam smart gun could be held in one hand, with the disk radome sensor used to target the weapon built into the left side of the front skirt armor. In the other hand, a drum-fed 120mm machine gun could be used, with four large ammunition drums stored on the re-designed multi-purpose latches over each of the shoulders. For use in close and melee range combat, the Xeku Zwei featured two head-mounted 60mm vulcan guns, and two beam sabers mounted on the top of upper backpack booster unit.

The standard close-range armament for many mobile suits. The beam saber is a small device held in the mobile suit's hands when operated and is powered by a rechargeable energy capacitor. It emits a blade of plasma contained by an I-field and is capable of cutting through any armor without anti-beam treatment. Xeku Zwei has a pair of beam sabers with power rating of 1.0 MW and they are stored on the backpack.

A standard armament of the mobile suits from the Earth Federation Forces. These head-mounted shell firing weapons have a high-rate of fire, but little power and can't damage the armor of a mobile suit. However, they can damage lightly armored areas such as the sensors, and are ideal for shooting down small, lightly armored targets such as missiles, attack vehicles, etc.

A trio of missile pods are located on the skirt armor that usually hold 18 short range missiles each for a total of 54.

A large machine gun with a rate of fire of 360-540 rounds per minute, and it carries roughly 6000 rounds of ammunition in each of the four huge drum magazines attached to its shoulders.

A specialized type of beam weapon designed for high precision. The particle deflecting system at the muzzle can bend the output beam by up to 20 degrees. As such, the smart gun that does not need to be pointed directly at the target to hit it, making it incredibly dangerous.

The latches are original feature on Xeku Ein's shoulder armor, with a pair of latches on its front and back to secure a Drum Magazine for the 120mm Machine Gun. For Xeku Zwei, its carriage capacity is doubled with the installation of total 8 latches on shoulder to hold a large carrying platform. With the Latch & Mount System, the Xeku Zwei can carry a total of 4 Drum Magazines on its shoulders, or a combination of other weapons and equipment to suit its operational needs.

A unique feature of Xeku Zwei is that it possesses four sub-arms. These arms are located on the side of respective shoulder and upper arm, and are much slimmer than Xeku Zwei's main arms, with only three fingers. These sub-arms allow Xeku Zwei to utilize up to six hand-held weapons, usually five of its Sturm Fausts and its main firearm, which, when combined with its surprising agility, makes Xeku Zwei a formidable opponent in ranged combat.

An external tank used for propellant storage. The extra propellant greatly extends a mobile suit's operating range, and enables it to stay in combat longer. When the propellant is consumed, the tank can be discarded to reduce the mobile suit's weight. These tanks use a two-layered construction, with one layer containing propellant, and the other holding extra coolant. The Xeku Zwei is equipped with a total of 6 External Propellant Tanks with 3 being mounted at the back of respective lower calf.

This prototype mobile suit is the second machine of the Xeku series developed at the asteroid base Pezun. Designed for both heavy armament and high mobility, the RMS-142 Xeku Zwei is equipped with huge thruster blocks and powerful boosters, making it highly maneuverable despite its large size and tremendous weight.

Although the Xeku Zwei has great firepower and high performance, its development is halted by the destruction of Pezun during the Pezun Rebellion. The rebel New Desides bring three prototype units with them to Ayers City, and these surviving machines are deployed in the final battle against the mobile suits of Task Force Alpha on April 4, UC 0088.

Using the Xeku Zwei, Josh Offshore is able to easily beat back the few remaining members of Task Force Alpha to buy time for the AMA-100 Z'od-iacok to make its move. Able to keep Ryou Roots in the MSA-0011 S Gundam at bay, Josh Offshore was soundly defeated when S Gundam's ALICE artificial intelligence computer took control of the unit, and the Xeku Zwei was destroyed when it burned up during atmospheric re-entry.

As featured in Gundam Sentinel 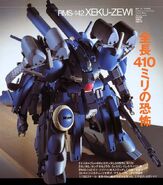 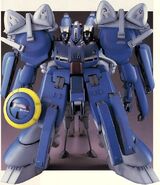 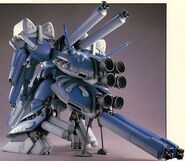 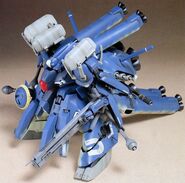 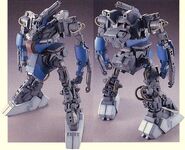 Retrieved from "https://gundam.fandom.com/wiki/RMS-142_Xeku_Zwei?oldid=497069"
Community content is available under CC-BY-SA unless otherwise noted.