The RMS-141 Xeku Eins is a mass-produced general purpose mobile suit fielded by the New Desides. It was featured in the photo-novel Gundam Sentinel and has 3 configuration types.

The design of the Xeku Eins is based on reliable, proven technology, and despite its good overall performance, the mobile suit itself has few distinguishing features. However, its sturdy frame and high generator output allow it to carry a large weapon payload, and the multipurpose latch and mount system built into its shoulders allows the Xeku Eins to carry a wide variety of optional equipment. As a result, this general-purpose mobile suit can reproduce the abilities of many different specialized machines. The capabilities of the Xeku Eins are highly regarded by the pilots of the instructor corps, and with the outbreak of the Pezun Rebellion, it becomes the main mobile suit of the New Desides.

There are three known configurations for the Xeku Eins. Type 1 is the most basic configuration, using a beam rifle with an attached grenade launcher. The mounts on its shoulders are for landing devices and external propellant tanks. This configuration is used by the pilots of the New Desides when they land their mobile suits on the lunar surface on March 13, UC 0088. It's also possible to replace the propellant tanks with a shield in order to arm the Xeku Eins with beam sabers.

Type 2 is armed for long-ranged assault. This configuration uses a long-range beam smart gun with a disc radome on its left shoulder. A shield, which holds up to two beam saber, can be attached to one or both shoulders. The Type 2 is used in the first encounter between the New Desides and Task Force Alpha on February 29, UC 0088.

Type 3 is a heavy assault configuration. Originally intended for attacking and defending space fortresses, it is armed mainly with projectile weapons. Its main weapon is a large 120mm machine gun with a high rate of fire, and it carries roughly 6000 rounds of ammunition in each of the huge drum magazines attached to its shoulders. Like the Type 2, this configuration has a pair of shield mounts in its shoulders, holding beam sabers and latches for optional equipment such as clay bazookas, bazooka magazines, and smoke dischargers. This is effectively the standard configuration of the Xeku Eins. The pilots of the Instructor Corps use this version to wipe out the regular Earth Federation Forces mobile suits stationed at Pezun, and after declaring themselves the New Desides, they continue using it throughout the Pezun Rebellion.

The main weapon for Type 1 configuration, the Beam rifle is the standard ranged armament of many mobile suits. The particle beam fired from a beam rifle can penetrate almost any armor not treated with specific counter-measures. It is powered by a rechargeable energy cap.

Fitted underneath the barrel of the beam rifle, the grenades fired weren't very effective against large ships, but were ideal mid-range anti-mobile suit weapons.

The main weapon for Type 2 configuration, the Beam Smart Gun is a specialized firearm designed for high precision attacks. The particle deflecting system at the muzzle can bend the output beam by up to 20 degrees. As such, the Beam Smart Gun does not need to be aimed directly at the target, making it incredibly dangerous.

The main weapon for Type 3 configuration, this is a large machine gun with a rate of fire of 360-540 rounds per minute. The Xeku Eins Type 3 can carry roughly 6000 rounds of ammunition in each of the huge drum magazines attached to its shoulders.

For Type 2 and Type 3 configurations, the Xeku Eins can be equipped with optional shield mounted onto one or both shoulders. Each Shoulder Shield features a pair of vernier thrusters to enhance Xeku Ein's mobility, as well as providing storage space for beam sabers and spare magazines for the Clay Bazooka.

The Beam Saber is a standard close-range armament for many mobile suits. It is a small device held in the mobile suit's hands when operated and is powered by a rechargeable energy capacitor. It emits a blade of plasma contained by an I-field and is capable of cutting through any armor without anti-beam treatment. For Type 2 and Type 3 configurations, the Xeku Eins can be equipped with a maximum of 4 Beam Sabers, with a pair being stored behind each optional Shoulder Shield.

A support weapon for Type 3 configuration, the Clay Bazooka is an innovative projectile weapon that first appeared during the Gryps War. It was originally designed to fire adhesive rounds which immobilize enemy machines rather than destroying them outright. However, it could also be loaded with other types of ammunitions, including conventional explosive round as well as pellet shot round. Xeku Ein's Clay Bazooka is a refined and compact version of the AE/ZIM.C-BAZ-531 model used by RMS-099 Rick Dias, with spare magazines stored on the optional Shoulder Shields.

The Xeku Eins can be equipped with two missile pods on each shoulder similar to the model used by ORX-013 Gundam Mk-V. A particular useful mid-range weapon, these missiles can destroy MS with a direct hit, but they are usually reserved for bigger targets.

An external tank used for propellant storage. The extra propellant greatly extends a mobile suit's operating range, and enables it to stay in combat longer. When the propellant is consumed, the tank can be discarded to reduce the mobile suit's weight. These tanks use a two-layered construction, with one layer containing propellant, and the other holding extra coolant. For all 3 types of configurations, the Xeku Eins is equipped with a total of 4 External Propellant Tanks with a pair being mounted at the back of respective lower calf. For Type 1 configuration, an additional 4 External Propellant Tanks can be equipped in place of the Shoulder Shields, with a pair of propellant tanks being mounted onto the respective shoulder.

When the Earth Federation Forces captured the Pezun asteroid base towards the end of the One Year War, they unearthed a treasure trove of new state-of-the-art mobile suit schematics that the Principality of Zeon were developing. One of the Zeonic designs discovered at Pezun in the five years following the One Year War was the "X Series" mobile suit development project. When the "X Series" data was discovered it as handed over to the lunar-based mobile suit construction firm, Anaheim Electronics, where the data was redesigned into the RMS-141 Xeku Eins and several units were built and sent to the Pezun base for testing.

Type 3 Equipment as featured in Model Graphix's Gundam Sentinel Special: "The Day Before (the formation of New Desides)" 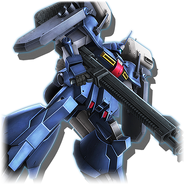