A reconnaissance variant of the RMS-106 Hizack used during the Gryps Conflict, the Earth Federation Forces' RMS-119 EWAC Zack could also be considered a distant relative of the old Principality of Zeon's MS-06E Zaku Reconnaissance Type. The most visible physical difference between the Hizack and the "Eye-Zack" (as it was sometimes called) was the large radome mounted on its head. This radome was equipped with a passive radar system, allowing the EWAC Zack to monitor enemy forces without giving itself away with active radar signals. The EWAC Zack was also equipped with various additional infra-red, communications, and visual sensors, allowing it to monitor the enemy in a variety of methods. The radome also featured a second mono-eye that ran on a track along the perimeter of its lower side, allowing the pilot to keep a lookout on the ground while flying or jumping overhead.

Although the use of radar- and radio-jamming Minovsky particles in battle situations renders such electronic forms of detection useless, the EWAC Zack was often used for pre- and post-combat actions, tasked with acquiring enemy strength, location, and disposition data. Thus, the EWAC Zack was also equipped with four data pods in its backpack, each of which carried recordings of the mobile suit's intelligence data and could be either jettisoned or launched back towards friendly forces. In the case of capture by the enemy, the data in the pods was also encrypted, thus assuring that valuable intelligence would not fall into the wrong hands. The EWAC Zack was also designed for long-range use, equipped with a pair of external fuel tanks for extended flight times. Although typically unarmed, the EWAC Zack could also be equipped with the weapons normally carried by a Hizack, if necessary.

The same shield model used by the original Hizack, it is mounted on the left arm. Shields are simple in their design, being essentially thick slabs of armor that the equipped mobile suit can use to absorb the impact from attacks that, for whatever reason, cannot be dodged. However shields can only withstand so much pressure before becoming damaged themselves.

The beam saber is a small device held in the mobile suit's hands when deployed and is powered by a rechargeable energy capacitor. It emits high-energy Minovsky particles to form a blade-shaped I-field (via manipulation of electromagnetic fields), and then fills this I-field shell with superheated Minovsky particle plasma to produce an effective cutting blade for close combat.

The EWAC Zack was originally built and operated by the Earth Federation forces, but the invasion of Earth by Neo Zeon during the First Neo Zeon War resulted in several of these units being captured by the enemy. At least one unit was also captured by the African Liberation Front rebel group, operated as part of their Blue Team and painted in their distinctive light blue-on-blue colors. Two other units made it into Mashymre's forces after he became a cyber newtype, assisting his Zssa squadron with a long range missile bombardment.

In U.C. 0096, at least one EWAC Zack is deployed by "The Sleeves" in Palau, an asteroid base of The Sleeves. These mobile suits would be repainted into a new color scheme and given the distinctive markings featured on many of the mobile suits used by The Sleeves.

An EWAC Zack variant featuring improved sensors and an additional mono-eye type camera that can swivel across the entire circumference of the large radome. 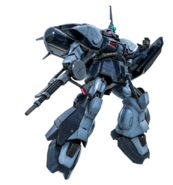