The RMS-117 Galbaldy β High Mobility Type is a mobile suit that appears in the novel Advance of Zeta: The Flag of Titans.

Equipped with a booster pod similar to that used by other Titans Test Team machines. This booster pod contains the same supplemental generator installed in the Hazel’s movable booster pod, and it has a pair of weapon latches that can hold shield boosters, long-range cannons, or missile pods. The Galbaldy Beta was equipped with multiple hard points for mounting optional weapons and equipment.

The MS-17 Galbaldy, a mobile suit developed by the Principality of Zeon at the end of the One Year War, was captured by the Federation intact and used in testing following the war, it would be developed further in the form of the improved Galbaldy Beta. Its cockpit was converted to a linear seat and its operating system replaced with a newer version, and the mobile suit’s weight was substantially reduced by completely remodeling its exterior. Thanks to these modernizing improvements, it remains in use on the front lines as of U.C. 0086. Since these machines were produced at the Federation Forces’ Luna II base, most of them are assigned to the space forces centered around the Luna II garrison. The basic performance of the Galbaldy Beta is equivalent to that of the GM II and Hizack, Tests are performed using the machine that is assigned to the Titans Test Team along with Lieutenant Maxim Gunar, but since it has no particular distinctive qualities it was not formally adopted by the Titans. 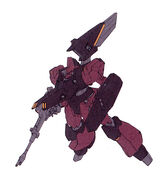 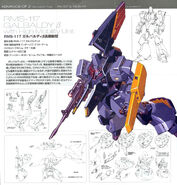