Based on the lightweight and mobile Galbaldy β, this Gunpla is customized with an emphasis on higher power output and durability.[1][2] After lots of trial and error by the experienced Builder, Koichi, the Gunpla's weight balance following the addition of heavy armor is adjusted to its best state, and does not hinder the mobile capabilities of the base kit.[2] The balance allows for rigid and flexible maneuvers, as though it has a body of iron with veins filled with blood.[2] It is equipped with distinctive new armaments such as a large-caliber howitzer and hammer pliers, a huge mass weapon, making it a machine perfect for experts.[1] Its armaments can effectively performance in various battle ranges when used alongside the upgraded head sensors.[2]

A large transforming melee weapon based on hammers and pliers.[2] With its large mass, it is normally used as a striking weapon, but it can also open and close like a pliers to grasp opponents and constrain or pulverize them.[2][3] Its durability, due to its large and simple structure, allows it to also be used as a shield.[2][3] Stored on the rear skirt armor when not in use.[2][3]

Mounted on the left side of the backpack, it carries 11 rounds in combustible cartridge cases that can be used in three different modes: armor-piercing bomb, guided bomb, and guided mine.[2] The rounds can be fired rapidly, and the weapon is mainly used for long distance support, including long-range artillery strikes.[2][3] It can rotate forward to fire at enemy unit in front, and can be purged when not required to prevent dead weight.[3][4]

Attached to the left forearm, this medium-sized defensive armament is designed after taking handling into consideration.[2] It is capable of blocking both physical and beam attacks.[4] A smoothbore gun is included in the tip to cope with short and medium range opponents.[2][3]

Attached to the right forearm, it flips over and protects the right hand when in use.[2] It is most effective in extreme close combat fights.[2] 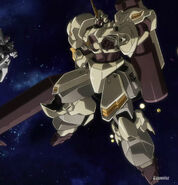 Back to back with Astray No-Name (Ep 25) 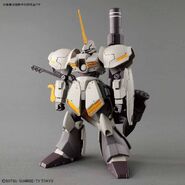 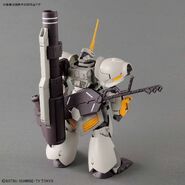 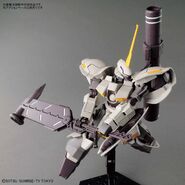 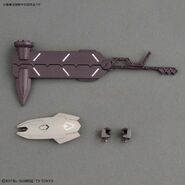