The RMS-108 Marasai, also known as the MSA-002 Marasai is a second-generation mobile suit in the Universal Century timeline. It first appeared in the series Mobile Suit Zeta Gundam.

The RMS-108 Marasai was developed using Zeon design principles combined with technology pioneered by the Earth Federation during the One Year War. Technologically based on the RMS-106 Hizack, the Marasai features improved technologies, such as a movable frame,[1] Gundarium Alloy armor instead of a titanium alloy that improves overall defense, greater sensor range, greater acceleration, and a more powerful Minovsky type ultracompact fusion reactor. It is equipped with high-power thrusters that allow atmospheric flight under gravity for a short period of time.[1]

Alongside its technological improvements, the Marasai is also several tons lighter than Hizack when measuring its empty weight. The Marasai did not have as large a weapon selection as the Hizack however, because the Hizack was often equipped with older weapons used by Zakus, such as machine guns and heat hawks, while the Marasai used only advanced beam weapons. The Marasai's standard weapons are a beam rifle, two beam saber, and two head mounted Vulcan guns. A large shield was attached to its right shoulder, much like Zeon's Zaku line of mobile suits.

A pair of vulcan guns are mounted on the Marasai's head. These shell-firing weapons have a high rate of fire but little power and are generally ineffective against mobile suits, though they can damage lightly armored areas such as the sensors. They are also ideal for shooting down small, lightly armored targets such as missiles or small vehicles.

The beam saber is a small device held in the mobile suit's hands when deployed and is powered by a rechargeable energy capacitor. It emits high-energy Minovsky particles to form a blade-shaped I-field (via manipulation of electromagnetic fields), and then fills this I-field shell with superheated Minovsky particle plasma to produce an effective cutting blade. The Marasai carries two beam sabers stored on the shield when not in use, this particular model used by the Marasai has a longer handle compared to others.

A standard hand carried ranged beam weapon is the beam rifle. The beam rifle used by the Marasai is the same model as the Hizack's. It is powered by a replaceable e-pac and is power rated at 2.2 MW.

Originally used by the RX-139 Hambrabi and RX-110 Gabthley, it is a long and powerful beam rifle. Power rated at 6.6 MW, and charged by rechargeable energy cap. It can also emit a beam saber, similar to the MSZ-006 Zeta Gundam's (BOWA) XBR-M87A2 Beam Rifle.

Another weapon originating from the Hambrabi, it was used by one of the Zeon Remnants' Marasai during the attack on Torrington Base. It is a handheld, wired grappling weapon capable of delivering crippling electrical shocks to enemy mobile suits. Its tip contains verniers that helped in controlling its trajectory.

Shields are simple in their design, being essentially thick slabs of armor that the equipped mobile suit use to absorb impact from attacks that, for whatever reason, cannot be dodged. Mounted on the right shoulder, it serves as the Marasai's primary means of defense and has a storage rack for its beam sabers.

An atmospheric entry device designed to be used by a Mobile Suit. As the mobile suit enters the atmosphere, a bowl-shaped ballute (balloon parachute) deploys to protect it from the friction heat of atmospheric entry. The balloon then detaches, leaving the mobile suit with chest and leg hover units which ease its descent to the ground. If the mobile suit reaches the ground without expending all the fuel in the leg units, these devices can also be used for hovering and high-speed strike missions. The equipment was designed and mass produced between the years UC 0083 and 0087 and is designed to be used by a multitude of different mobile suit models.

Originally developed by Anaheim Electronics for the Anti Earth Union Group as the "MSA-002", it was designed to be an all round better version of the RMS-106 Hizack. However, due to pressure from the Titans, Anaheim presented them with the design when the Titans started to turn their attention towards Anaheim's support of the AEUG. It was formally adopted and put into mass production as the "RMS-108", being the eighth machine developed at the Granada base.[1]

Many pilots used Marasai's in the Titans and Earth Federation, most famous is Kamille Bidan's rival, Jerid Messa. While defending the Earth Federation base Jaburo, Jerid's Marasai fought with the RX-178 Gundam Mk-II before being destroyed. Other pilots of the Marasai include Kacricon Cacooler and Sarah Zabiarov. Kacricon was killed by Kamille Bidan, who destroyed his Marasai's Ballute, causing him to burn up in the atmosphere.

As the Gryps Conflict continued, Marasai's would be fielded in by the Titans as a frontline machine, often facing it's A.E.U.G counterpart, the MSA-003 Nemo, in combat. Near the end of the war, the RMS-154 Barzam would begin being replacing the Marasai as the Titans main mobile suit.

After the Gryps Conflict, the Earth Federation sought to distance itself from the Titans and abandoned numerous mobile suit designs that were used by the latter (no matter how effective they were). The abandoned Marasais were picked up by the first Neo Zeon, who would use the machines to fill out their ranks. During Glemy's rebellion, some units were used by his faction and were painted in a gray color scheme.

After the First Neo Zeon War, many Marasai's were destroyed. Some of those that survived were later used by remnants of the Principality of Zeon, who repainted the Marasai in their own distinctive green color scheme.

During UC 0096, several Marasai units were used by Zeon remnants to attack the Federation's Torrington Base. One of these units was later destroyed by the RX-160S Byarlant Custom. Another unit was destroyed by regrouping Earth Federation forces during the Federation counterattack.

In the fourth episode of Gundam Build Fighters, a Marasai appears equipped with a Hyper Mega Launcher fighting the Build Strike Gundam, with the fight ending with the Marasai defeated. 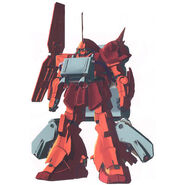 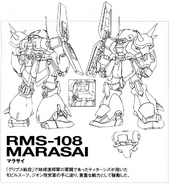 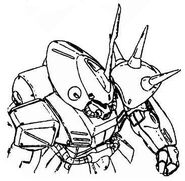 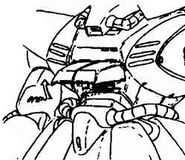 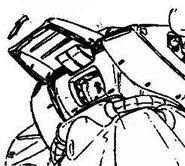 Close up of open cockpit hatch

As featured in Mobile Suit Zeta Gundam Define, with its pilot Yazan Gable 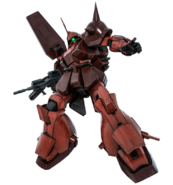 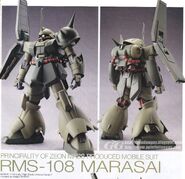 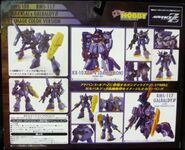