The RMS-106 Hizack (aka Hi-Zack) is a mass-production general-purpose mobile suit featured in Mobile Suit Zeta Gundam. It was based on the MS-06 Zaku II mobile suits and was used by EFSF groups, notably the Titans, during the Gryps War.

A mass-produced mobile suit developed at Granada, the Hizack was a vast improvement over the Principality of Zeon's MS-06 Zaku II. The data from the MS-06F2 Zaku II F2 Type was also referenced during development.[1] Although the Titans were assigned to wipe out the remaining bits of the Zeon forces, their Hizack uses the same dark green color scheme. Meanwhile, the regular Earth Federation Forces used a dark blue color for their units.

The Hizack is outfitted with a titanium alloy ceramic composite armor, and has a higher output generator than that of a Zaku. It is also faster and more agile than its predecessors, and is easily controlled by its pilot. The Hizack is most often equipped with an 120mm machine gun kai, beam saber or heat hawk. Sometimes, it is equipped with a beam rifle, but it has fairly low tolerance for beam weaponry due to its low energy output, meaning it can only carry one at a time. The Hizack can also be equipped with missile pods.

A standard hand carried ranged beam weapon is the beam rifle. This particular model is same as the one used by the Marasai, however, the Hizack's low generator output hinders its effectiveness. It is powered by a replaceable e-pac and is power rated at 2.2 MW. 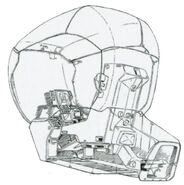 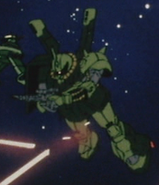 Retrieved from "https://gundam.fandom.com/wiki/RMS-106_Hizack?oldid=432036"
Community content is available under CC-BY-SA unless otherwise noted.