The RMS-106 Hi-Zack (aka Hizack) is a mass-production general-purpose mobile suit. Based on the mobile suit line of the MS-06 Zaku II, the Hizack was a mass production suit used by the Titans and EFSF in Mobile Suit Zeta Gundam.

The mass produced Mobile Suit of the Titan Forces, as well as the Earth Federation, the Hizack was a vast improvement over the Zaku II, used by the Principality of Zeon. Although the Titan Forces were assigned to wipe out the remaining bits of the Zeon forces, the Titan Hizack uses the same dark green color scheme (The Earth Forces had used a dark blue color for theirs). The Hizack is most often equipped with an out of date Zaku-series 120mm machine gun, as well as beam sabers or heat hawks. Hizacks are also sometimes equipped with a beam rifle, but its fairly low tolerance for beam weapons due to low energy output means it can only carry one at a time. Hizacks may also be equipped with missile pods instead of the hand thrown grenades of previous Zakus.

The Hizack has a pair of 3-tube missle pods mounted on each side of its hips. These would be used for long to mid-range bombardment. 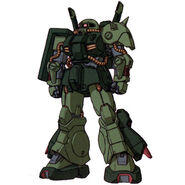 150px-RMS-106 Hi-Zack.jpg
SD RMS-106 Hizack as it appear in SD Gundam G Generation Wars
Add a photo to this gallery

Retrieved from "https://gundam.fandom.com/wiki/RMS-106_Hizack?oldid=198677"
Community content is available under CC-BY-SA unless otherwise noted.