Developed by Anaheim Electronics, the RMS-099 (MSA-099, MSA-009) Rick Dias (codename: "γ Gundam" (Gamma Gundam) became one of the first mass-produced mobile suits of the AEUG's Zeta Project for their fight against the corrupt Titans. Because many engineers who worked on the Rick Dias were former Principality of Zeon members, the Rick Dias featured many similarities to Zeon mobile suits such as a mono-eye sensor. The Rick Dias ("Dias" is derived from Bartolomeu Dias, the Portuguese explorer who first rounded the Cape of Good Hope) was originally to be called Gundam γ as it is built out of the new Gundarium γ. This material was developed by Axis and has strength similar to standard Gundarium yet is structurally lighter, making the suit lighter and thus allowing it to accommodate a greater fuel capacity.

The Rick Dias is one of the earlier mobile suits to use the 360-degree panoramic cockpit, and the first original design to be constructed by the AEUG. One notable feature is that unlike other mobile suits at the time, the cockpit of the Rick Dias is built into the head and not the chest. Built into its hands are specialized launchers that can be used to launch fire-suppressing gas or a binding adhesive. For combat, the Rick Dias is equipped with a large variety of weapons, making it a versatile mobile suit. Among its built-in weapons include a 2-barrel 55mm vulcan phalanx in its head and a beam saber stored in a rack on the backpack. For ranged combat, the Rick Dias is equipped with a pair of beam pistols stored in backpack storage racks. It can also be optionally equipped with a clay bazooka and a beam rifle.

Mounted in the top of the Rick Dias' head, and covered by a hinged hood when not in use, they are equivalent to the vulcan guns commonly used by other mobile suits. These shell firing weapons have a high-rate of fire, but little power and are generally ineffective against mobile suits; however, they can damage lightly armored areas such as the sensors. These weapons are ideal for shooting down small, lightly armored targets such as missiles, small vehicles, etc.

An innovative projectile-firing weapon, the Clay Bazooka was originally designed to fire adhesive rounds which immobilize enemy machines rather than destroying them outright. However, it could also be loaded with other types of ammunition, including conventional explosive round as well as pellet shot round. The Clay Bazooka has 1 round in its chamber with 7 more rounds in a reloadable magazine. A retractable hook is present on top of the bazooka's barrel for mounting onto Rick Dias's backpack when not in use.

The Rick Dias is equipped with a pair of Beam Pistols as its primary ranged beam weapon. Despite its compact size, it is powerful enough to destroy an enemy mobile suit with a single shot. The Beam Pistols are stored on a storage rack on the Rick Dias' backpack when not in use, and while stowed, they could fire directly with a limited firing arc.

A standard hand carried ranged beam weapon is the beam rifle. Capable of firing concentrated mega particles, attacks from a beam rifle can damage any ordinary armor that has not been specially treated to resist it. It is the same one used by the RMS-117 Galbaldy β.

The beam saber is a small device held in the mobile suit's hands when operated and is powered by a rechargeable energy capacitor. It emits a blade of plasma contained by an I-Field and can cut through any armor not treated with anti-beam coating. The Rick Dias stores a single beam saber in a rack located under the beam pistol's storage rack. Power rated at 0.4 MW, the model of beam saber used by Rick Dias is also used by other mobile suits such as Hyaku Shiki and Nemo.

Mounted on the Rick Dias' backpack, the pair of Random Binders are a combination of vernier thrusters with propellant tanks and are capable of Active Mass Balance Auto-Control (AMBAC) like the suit's limbs. Thanks to these binders, the suit has excellent mobility. They could be ejected when not required.

This device sprays a sticky sealant, similar to the wall film used to mend breaches in warship hulls. This substance can be used to seal ruptures in spacecraft and space colony exteriors. By the time of the Gryps Conflict most mobile suits have sealant launchers built into the fingers of their manipulators, as well as utility devices like signal flares, dummy dispensers, and fire extinguishers.

The Rick Dias was AEUG's first original and most powerful mass-production mobile suit, making its first known major use during the mission to infiltrate Gryps and steal the new RX-178 Gundam Mk-II. Three Rick Dias were used to infiltrate the colony, led by AEUG ace pilot Quattro Bajeena in his custom painted red Rick Dias. The mission was successful and proved the value of the Rick Dias.

For all following missions, Rick Dias were assigned to the AEUG's top pilots who did not possess their own custom unit such as the Gundam Mk-II or the MSN-00100 Hyaku Shiki. Initially, the standard color scheme for the Rick Dias was black and dark gray. However at some point, while the AEUG was on Earth, the standard color scheme was switched over to the same red coloring scheme used on Quattro Bajeena's unit and later piloted by Emma Sheen.

Despite being technologically advanced and state of the art at the start of the Gryps Conflict (to the point that the Titans tried to steal some of the Argama's compliment), the Rick Dias was soon overshadowed by the increasingly more advanced designs in the AEUG and the Titans. By the start of the First Neo Zeon War, there were only a few operational units left, but they would see little use, as what remained of the AEUG and Karaba would use the newer RGM-86R GM III. 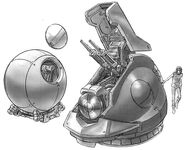 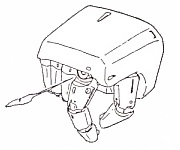 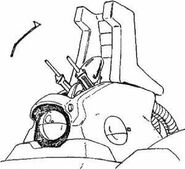 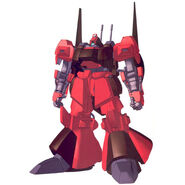 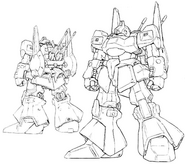 Wreckage of a Rick Dias Gunpla of the 7th Panzer Division 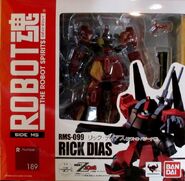 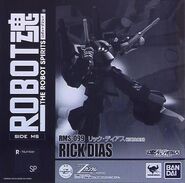 Retrieved from "https://gundam.fandom.com/wiki/RMS-099_Rick_Dias?oldid=438254"
Community content is available under CC-BY-SA unless otherwise noted.