The Rick Dias S was an minor improvement over the standard RMS-099 Rick Dias, it removed the beam pistols and replaced the clay bazooka with a more powerful long bazooka, allowing the Rick Dias S to act as a long range support unit. While the random binders was removed, it's overall performance is better than the original Rick Dias. It was designed to work with the FXA-04 D-Defenser an assist unit similar to the G-Defenser developed for the RX-178 Gundam Mk-II. The D-Defenser would provide great thrust for the Rick Dias S in space and also had a pair of machine guns as addition weaponry. The Rick Dias S combined with D-Defenser was also known as the Super Dias. 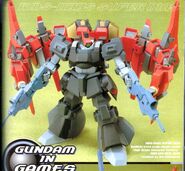 RMS-099S Rick Dias S and Defencer Back and Front lineart

Retrieved from "https://gundam.fandom.com/wiki/RMS-099S_Rick_Dias_S?oldid=458668"
Community content is available under CC-BY-SA unless otherwise noted.