The Schuzrum Dias is an improved version of the RMS-099 Rick Dias for hit and run assault missions. Commander-use version of the suit has a flared-out armor piece on the head, while the standard type has the same head as Rick Dias. Other differences between Schuzrum Dias and Rick Dias include the use of different rear skirt armor, knee armor, and the replacement of the booster binders with the new gyre binders. The gyre binders greatly improved the suit's maximum speed, and is also armed with an integrated beam cannon each for better firepower. The suit retains the weaponry of the Rick Dias.

Mounted in the top of the suit's head, and covered by a hinged hood when not in use, this double-barreled gun is equivalent to the vulcan guns commonly used by other mobile suits. This shell firing weapon has a high-rate of fire, but little power and are mainly used for intercepting enemy missiles/units, as warning shots, and to destroy lightly armored targets.

A pair of handheld beam pistols that are powerful enough to destroy an enemy mobile suit with a single shot despite their compact size. The Beam Pistols are stored on a holder on the Schuzrum Dias' backpack when not in use, and while stowed, they could fire directly with a limited firing arc.

The beam saber is a small device held in the mobile suit's hands when deployed and is powered by a rechargeable energy capacitor. It emits high-energy Minovsky particles to form a blade-shaped I-field (via manipulation of electromagnetic fields), and then fills this I-field shell with superheated Minovsky particle plasma to produce an effective cutting blade. The Schuzrum Dias has one beam saber stored in an unknown location.

A projectile-firing bazooka, it was originally designed to fire adhesive rounds which immobilize enemy machines rather than destroying them outright. However, this weapon can also fire other types of ammunition, and it's normally used with conventional explosive shells.

A beam cannon is mounted at the top of each Gyre Binder. With a maximum output of 4.2 MW, the pair of beam cannons are the suit's strongest ranged beam weaponry.

Mounted on the back, the pair of Gyre Binders contain vector thrusters, an integrated beam cannon each and propellant tanks. Thus, it simultaneously improves the Schuzrum Dias' speed and firepower. Thanks to these binders, the Schuzrum Dias' top speed is 1.5 to 2.5 times that of the Rick Dias. Like the Rick Dias' Booster Binders, the Gyre Binders act as Active Mass Balance Auto-Control (AMBAC) limbs, but are often dead weight in melee combat.

The RMS-099B Schuzrum Dias was developed by Anaheim Electronics during the First Neo Zeon War and was deployed by the Republic of Zeon as part of their colony defense forces. However, a few pilots still loyal to the Principality of Zeon's cause defected with their Schuzrum Dias over to Neo Zeon. 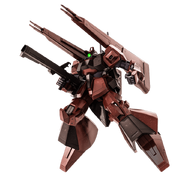