The RIX-001 Gundam G-First was a mobile suit that was ordered by the Earth Federation Forces and developed by Anaheim Electronics for the ceremony at Side 7. It is based on the design data of the RX-94 Mass Production Type ν Gundam and used as a test machine for design verification.

A total of six beam sabers are stored in the G-First's shoulders, waists, and deployable Knee Crushers.

​The G-First's beam rifle is a hybrid design that can either be powered by E-pacs or draw power directly from the generator, allowing it to continue fighting for longer.

Based on the ZZ Gundam's Wing Shields, they are mounted on the G-First's arms in order to protect its weakly armored waist regions. In addition, they also store backup E-pacs and Micro Missiles. 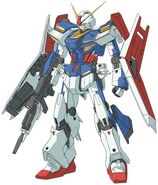 Retrieved from "https://gundam.fandom.com/wiki/RIX-001_Gundam_G-First?oldid=491640"
Community content is available under CC-BY-SA unless otherwise noted.