The RGZ-95 ReZEL (Defenser b-Unit) is the ReZEL equipped with the optional Defenser b-Unit backpack. Developed specifically for the ReZEL, the Defenser backpack is a space-use assault backpack for conducting rapid, preemptive attacks on the frontline or at enemy's stronghold.[1] Due to the high skills needed to use the Defenser backpack properly, it is normally fitted on the ReZEL Commander Type[1], but there are cases of them being used by the normal ReZEL. There are two versions of the Defenser backpack, the 'a-Unit' and the 'b-Unit'.[1] The Defenser b-Unit backpack is armed with mega beam launchers and mega particle cannons for concentrated single point attacks at mid to long range, and has additional generators to improve the operation efficiency of the suit's beam weapons.[1] This backpack also has additional thrusters, and the usual side skirts of the ReZEL are replaced with movable, thruster equipped tail binders.[1] In waverider mode, the tail binders boost the suit's propulsion capabilities, and in mobile suit mode, they improve the suit's mobility, allowing it to change direction quickly.[1]

A standard armament mounted on most Federation mobile suits. The pair of head mounted shell firing weapons have a high rate of fire, but little power. They are mainly used to restrain enemy units, intercept missiles and the like.

A beam weapon for close combat. It is a small device held in the mobile suit's hands when operated and is powered by a rechargeable energy capacitor. It emits a blade of plasma contained by an I-Field and can cut through any armor not treated with anti-beam coating. A pair of beam sabers can be stored in each forearm. Can be switched out for the grenade launchers.

A mega particle cannon is mounted in the tip of each binder of the Defenser b-Unit backpack, they serve as the main weapon in waverider mode.[1] The layout of the pair of mega particle cannons are influenced by the ORX-005 Gaplant and the RAS-96 Anksha.[1]

Mounted on the Defenser b-Unit backpack, it is the same high output beam weapon as used by the standard ReZEL and ReZEL Commander Type. Besides receiving energy supply from the suit’s generator, the launcher itself also has a sub-generator for supplementary purposes, and this allows for stable number of shots and output. As the Defenser b-Unit backpack has two of these launchers, it allows the equipped suit to fire them at their maximum power continuously, something that the standard ReZEL or ReZEL Commander Type cannot as they are typically armed only with one mega beam launcher.[2] 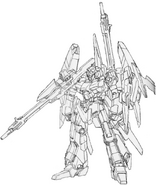 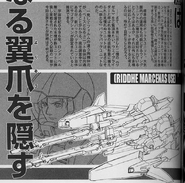