A beam weapon for close combat. It is a small device held in the mobile suit's hands when operated and is powered by a rechargeable energy capacitor. It emits a blade of plasma contained by an I-Field and can cut through any armor not treated with anti-beam coating. A pair of beam sabers can be stored in each forearm. Can be switched out for the Grenade Launcher.

A pair of hyper beam sabers are stored on the Defenser a-Unit backpack. The beam blade emitted have a 50% higher output than the one generated by a normal beam saber, and can hit multiple enemy units in a single strike.[1] It is developed based on the weapon of the same name used by the MSZ-010 ΖΖ Gundam, and is refined for use by mass production mobile suits.[1] Unlike the ZZ Gundam's, the Defenser a-Unit's hyper beam saber cannot function as beam cannon while stored; the firing mechanism is omitted in favor of stable energy supply.[1]

The six containers mounted on the tip of the Defenser a-Unit backpack contains a total of 96 micro missiles.[1] The micro missile are meant for widespread, pre-emptive strikes in close to mid range combat.[1] 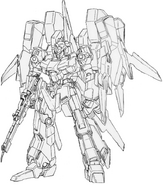 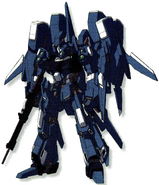 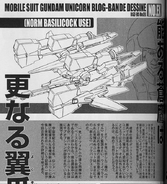