A beam weapon for close combat. It is a small device held in the mobile suit's hands when operated and is powered by a rechargeable energy capacitor. It emits a blade of plasma contained by an I-Field and can cut through any armor not treated with anti-beam coating. A pair of beam sabers can be stored in each forearm. Can be switched out for the Grenade Launcher.

An optional high output beam weapon specifically designed for the ReZEL. It can be used for longe range support, and is mounted on the backpack when equipped. Besides receiving energy supply from the suit’s generator, the launcher itself also has a sub-generator for supplementary purposes, and this allows for stable number of shots and output.

A number of ReZEL Type-C(GR) units were deployed by the General Revil during its ambush on the SCVA-76 Nahel Argama and the Garencieres in U.C. 0096. Some of the units were intercepted and disabled by the YAMS-132 Rozen Zulu and MSN-06S Sinanju.

In U.C. 0097, the General Revil was dispatched to the Helium-3 storage base to destroy the Republic of Zeon's Chivvay-class cruiser Gulltoppr, believing it to be operated by Sleeves remnants. ReZEL Type-C (GR) units were among the mobile suits deployed by the General Revil to engage Zoltan Akkanen's NZ-999 II Neo Zeong nearby. Most of them were annihilated by the II Neo Zeong along with their mothership.

In Waverider mode with Jegan Type-A2 (GR) riding on top

A ReZEL Type-C (GR) in Waverider mode with an Jegan Type-A2 (GR) hanging on. Another can be seen in MS mode 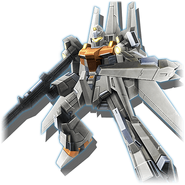