Used by the General Revil battleship, it is the ReZEL Type-C (GR) equipped with the Defenser a-Unit backpack. Aside from the colors, the suit does not seem to have any differences from the normal RGZ-95C ReZEL Type C (Defenser a-Unit). The Defenser backpack is a space-use assault backpack for conducting rapid, first strike attack on the frontline or enemy's stronghold, and there are two versions: the 'a-Unit' and the 'b-Unit'. The Defenser a-Unit backpack is armed with micro missiles and hyper beam sabers for dealing widespread damage at close to mid range. This backpack also has additional thrusters, and the usual side skirts of the ReZEL Type C are replaced with movable, thruster equipped tail binders. In waverider mode, the tail binders boost the suit's propulsion capabilities, and in mobile suit mode, they improve the suit's mobility, allowing it to face the correct direction quickly.

A beam weapon for close combat. It is a small device held in the mobile suit's hands when operated and is powered by a rechargeable energy capacitor. It emits a blade of plasma contained by an I-Field and can cut through any armor not treated with anti-beam coating. A pair of beam sabers can be stored in each forearm. Can be switched out for the grenade launchers.

A pair of hyper beam sabers are stored on the Defenser a-Unit backpack. The beam blade emitted have a 50% higher output than the one generated by a normal beam saber, and can hit multiple enemy units in a single strike. It is developed based on the weapon of the same name used by the MSZ-010 ΖΖ Gundam, and is refined for use by mass production mobile suits. Unlike the ZZ Gundam's, the Defenser a-Unit's hyper beam saber cannot function as beam cannon while stored; the firing mechanism is omitted in favor of stable energy supply.

The six containers mounted on the tip of the Defenser a-Unit backpack contains a total of 96 micro missiles. The micro missile are meant for wide spread, overwhelming first strike in close to mid range combat.

One such unit was piloted by Riddhe Marcenas after he was assigned to the General Revil's mobile suit team following the opening of the Laplace's Box. During a patrol mission near the Republic of Zeon border, Riddhe suddenly broke formation and flew toward Republic of Zeon territory in order to find the Magallanica. After warning him to stop to no avail, the rest of his unit, led by Iago Haakana, fired on him in an attempt to stop him. However, Riddhe was able to shake them off by firing the ReZEL's micro missiles at them. The missiles detonated around them harmlessly, revealing them to be flares.

As Riddhe's ReZEL entered Republic of Zeon territory, one RMS-099B Schuzrum Dias and two RMS-106CS Hizack Custom from the Republic of Zeon coastal defense force deployed to intercept him, but Riddhe was able to disable all three of them. He was then attacked by a modified MA-05R Big Ruf. Though initially caught off-guard, Riddhe was able to destroy the Big Ruf's booster, and the Big Ruf was recalled by the defense force, since it was nearing the restricted area around the Magallanica.

Finally, Riddhe arrived at Side 3's Helium-3 storage base, where the Magallanica was hiding. He fired all of his remaining missiles at the Magallanica, and threatened to blow up the Helium-3 tank beneath him with his beam rifle if Banagher doesn't show up. Soon, Banagher appeared in a modified RX-178 Gundam Mk-II and destroyed the missiles with a shot from its beam magnum. Riddhe handed his airplane pendant to Banagher, and entrusted the duty of protecting Mineva to him before he was arrested by Republic of Zeon forces.

In Return of the Lion 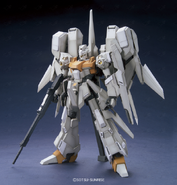 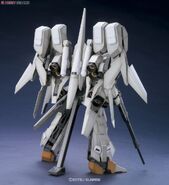 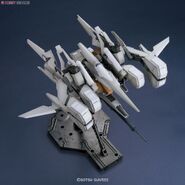 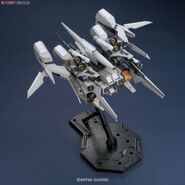