The RGZ-95C ReZEL Commander Type (aka ReZEL Type C) is a mass-produced commander's variant of the RGZ-95 ReZEL. It is featured in the novel and OVA version of the Mobile Suit Gundam Unicorn. One of these units is piloted by Norm Basilicock.

The ReZEL Commander Type, also known as ReZEL Type-C, is a high performance variant of the standard ReZEL created for mobile suit commanders, veterans and ace pilots.[1][2][3] While the standard ReZEL places priority on usage with other mobile suit teams, the Type-C is meant for exceptional, individual tactics.[3] The thrust limiters of the standard ReZEL to make the machine easier to control are disengaged in the Type C, and its frame is reinforced accordingly.[3] There were also other adjustments made to restore the ReZEL to its original peak performance, and improve its durability and reliability.[3] The control support system of the new OS that simplifies control of the Waverider Mode for rookies were also frequently cut in the Type-C as their pilots view it as a hindrance due to it reducing the mode’s mobility, and thus prefer the original complex controls.[3]

The Type-C can be differentiated from the standard ReZEL by the green sensors on its head, chest and shoulders.[4] As with the standard ReZEL, the Type-C can be equipped with a different backpack depending on the mission’s needs.[3] The Londo Bell received priority deployment of this unit, and the Type-Cs stationed onboard the SCVA-76 Nahel Argama are configured with the "Wing Unit" backpack and armed with the Mega Beam Launcher as a standard armament.[3] The Wing Unit backpack has a pair of wing binders that not only grant better mobility in space, but also atmospheric re-entry, atmospheric flight capabilities, and improved thrust that allows the suit to function as a sub-flight unit under gravity.[3] Like the "Box Unit" backpack frequently used by the standard ReZEL, the Wing Unit backpack also has a pair of grips.[2]

A standard armament mounted on most Federation mobile suits.[2] The pair of head mounted shell firing weapons have a high rate of fire, but little power. They are mainly used to restrain enemy units[2], intercept missiles and the like.

A grenade launcher with two rounds can be mounted in each forearm.[2] It is comparable to the ones used by the Re-GZ and has proven effective in close combat.[2] Can be switched out for the beam sabers.[2]

A beam weapon for close combat. It is a small device held in the mobile suit's hands when operated and is powered by a rechargeable energy capacitor. It emits a blade of plasma contained by an I-Field and can cut through any armor not treated with anti-beam coating. A pair of beam sabers can be stored in each forearm.[2] Can be switched out for the Grenade Launcher.[2]

The main armament of this machine, it has a shape close to that of the beam rifle used by the Zeta Gundam. The ReZEL's beam rifle is powered by a replaceable E-pack, if the E-pack runs out of energy it can be replaced with a fresh one stored under the ReZEL's shield. Besides the standard shooting mode, the ReZEL's beam rifle also has a long duration, high output shooting mode that is known among the federation’s pilot as the ‘Guillotine burst’.[5] Lastly, the beam rifle's muzzle can generate a beam blade, allowing the rifle to function as a long beam saber.[5]

An optional high output beam weapon specifically designed for the ReZEL, it is configured as a standard armament for the Nahel Argama's ReZEL Commander Type.[3] It can be used for longe range support, and is mounted on the backpack when equipped.[3] Besides receiving energy supply from the suit’s generator, the launcher itself also has a sub-generator for supplementary purposes, and this allows for stable number of shots and output.[3]

A multipurpose defensive equipment developed specifically for the ReZEL.[2] A beam cannon that fires in a 3-round burst is mounted at the front, and serves as the main weapon in waverider mode.[2] The blade at the back of the shield can be used as a ramming weapon in close combat.[2]

In the events of Mobile Suit Gundam Unicorn, one ReZEL Commander Type from the Nahel Argama was among several mobile suits destroyed by the Sleeves' NZ-666 Kshatriya in the battle within the space colony Industrial 7. Later, another ReZEL Commander type was deployed by the Nahel Argama during the encounter with Full Frontal and his MSN-06S Sinanju and was subsequently destroyed. Another unit, with the call sign 'Romeo-11', was seen defending the Nahel Argama during the final battle with the Sleeves. Despite being heavily damaged, it destroyed several enemy mobile suits including a AMX-107 Bawoo. 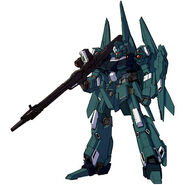 With ReZELs in Mobile Suit Bible artwork by Morifumi Naka 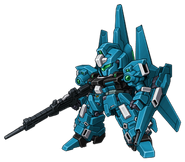 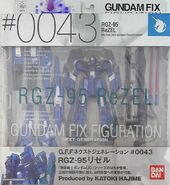 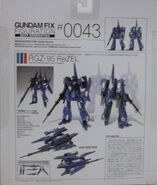 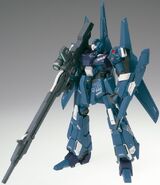