The RGZ-91 Re-GZ (Refined Gundam Zeta) (リ·ガズィ, Ri Gazi?) is a prototype transformable mobile suit based on the MSZ-006R Zeta Plus R. It was featured in the anime movie Mobile Suit Gundam: Char's Counterattack and had a cameo in the OVA series Mobile Suit Gundam Unicorn.

The Re-GZ was developed by Anaheim Electronics as a simplified variant of the company's masterpiece, the MSZ-006 Zeta Gundam[1]. Consideration for mass-production was taken into account[2], and it aimed for a lower cost than the limited-production Zeta Plus series[3]. The basic design of Re-GZ's body follows that of the Zeta Gundam's MS form while parts such as the arms are shared with the RGM-89 Jegan[3]. The transformation mechanism was considered too costly to mass-produce, and was removed in favor of a special Back Weapon System (BWS)[4], which the Re-GZ can dock with to change to a Waverider-like form.

The BWS was developed with reference to subflight systems such as the Base Jabber and FXA-05D G-Defenser[3], and in particular, the MSZ-006R Zeta Plus R (a machine with a large detacheable backpack) from the Zeta Plus series[3][4]. The BWS is armed with additional beam weapons and propellant tanks. As the Re-GZ was developed during a time where large-scale battles did not occur[5][6] and it was more expensive than other MS, so only one prototype was built[5]. Despite the Re-GZ boasting high specifications that outclassed other mass-production machines[4], it struggled against Neo Zeon's Newtype-use mobile suits[1] in U.C.0093 due to a lack of Psycommu weapons[5].

The standard close range armament for most mobile suits, it is a small device held in the mobile suit's hands when operated and is powered by a rechargeable energy capacitor. The beam saber emits a blade of plasma contained by an I-Field and can cut through most armor not treated with anti-beam coating. The Re-GZ has a pair of beam sabers with an output of 0.7 MW each, and they are stored in the backpack. The Re-GZ's beam saber has an unique shape in which part of the flange spreads from side to side at the time of use. Additionally, a limiter is installed to reduce energy consumption so that the beam blade is not generated until just before the slash.

The Re-GZ is equipped with four 2-tube grenade launchers, two mounted on the forearms and one on each of the side skirt armor.

A standard hand carried ranged beam weapon is the beam rifle. This particular model used by Re-GZ has an output of 3.8 MW and is equipped with a laser sensor at the top of the barrel. When not in use, the beam rifle can be stored on the back of the shield.

A basic arm-mounted defense equipment for many Federation mobile suits. The shield is a thick sheet of armor designed to take severe punishment that would normally destroy a mobile suit. It is also treated with an anti-beam coating to withstand several beam shots before the coating wears off. Typically, physical shields can only take so much damage before they succumb to the pressure and break.

Three hand grenades are stored at the top of the back of the shield.

Mounted on the BWS are two beam cannons and one mega beam cannon. These are the strongest weapons of the Re-GZ, but can only be used when the BWS was docked. These beam cannons can destroy a normal MS with one shot, or sink cruiser-class vessels in one volley.

Special optional parts, it is equipped with a mega beam cannon in the nose and beam cannons on both sides. Additionally, it carries propellant tanks beneath the wings. It is possible to mount missile launchers in underwing pylons[7]. By mounting the BWS, the Re-GZ can operate as a heavy space fighter with emphasis on space combat. While it is possible to separate the BWS during combat, it cannot be docked with afterwards [8].

Only shown in Char's Counterattack - Beltorchika's Children, the Re-GZ's cockpit is lined with nanoscopic psycommu receptors, allowing a Newtype pilot to operate both the mobile suit and psycommu weaponry with ease. The remaining psycho-frame material salvaged from the MSN-03-2 Psycho Doga was installed in the Re-GZ after being installed on the RX-93-2 Hi-ν Gundam.

In U.C. 0093 the Re-GZ was deployed to the Londo Bell task force, which was fighting against the Neo-Zeon army led by Char Aznable. The first person to pilot the Re-GZ was the famous One Year War veteran Amuro Ray, who used the suit in the failed attempt to stop the asteroid Fifth Luna from hitting the Earth. He fought against cyber newtype Gyunei Guss in his MSN-03 Jagd Doga and Char in his MSN-04 Sazabi. Afterwards, the Re-GZ was assigned to squadron leader Kayra Su, who was defeated and killed by Gyunei. During this battle, the Re-GZ also lost its right arm and leg.

After being brought back to the Londo Bell flagship Ra Cailum, the still-damaged Re-GZ was finally used by young Londo Bell officer Chan Agi, who used it to fight against Quess Paraya in the massive mobile armor NZ-333 Alpha Azieru. During the battle, she accidentally fired a missile at the Azieru's cockpit, killing Quess and destroying the Alpha Azieru. Because of this, Hathaway Noa, who was in love with Quess and also trying to persuade her to defect, used the beam rifle of his RGM-89 Jegan to destroy the Re-GZ, killing Chan.

Another Re-GZ was later built and stationed on the Ra Cailum during the events of the Laplace Incident in Gundam Unicorn, although it did not see action during the conflict. 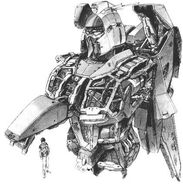 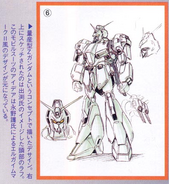 With Back Weapon System (from Hajime Katoki's Gundam Fix pictorial) 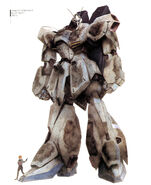 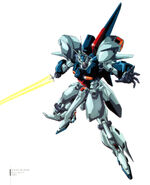 In the hangar with two Jestas (Gundam Unicorn) 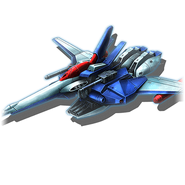 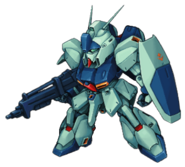 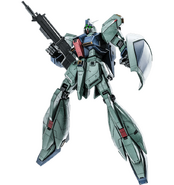 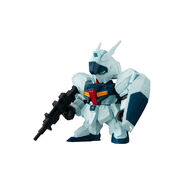