The RGZ-91X Re-GZID is a mobile suit appearing in the Mobile Suit Moon Gundam manga.

The RGZ-91X Re-GZID was one of the designs that was born during the process of selecting the formally adopted model of RGZ-91 Re-GZ. The Re-GZID was not adopted as it was more expensive than the later formal model, however, one prototype was built due to Amuro Ray's strong involvement with the design. Amuro considered this machine to be the ideal form of the Re-GZ (ideal = ID), and so named it "Re-GZID." [1] 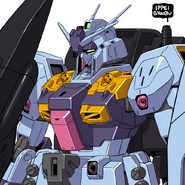