Like its base unit, the RGM-89 Jegan, the RGM-96X Jesta can adapt to different needs through the use of dedicated option parts, resulting in multiple variants. An example of this is the Jesta Cannon, a heavy armed variant with enhanced firepower via the addition of a beam cannon, a quadruple multi-launcher, more hand grenades and an enhanced beam rifle. It also has added body armor, including an arm-mounted shield, but their placement is kept to a minimum after considering weight balance. When needed, the added armor can be purged instantly using explosive bolts.

To handle the added weapons, the Jesta Cannon's fire control systems has been improved. Not only can the Jesta Cannon served as a mid-range fire support unit, which is a function synonymous with mobile suits that have the word "Cannon" in their name, it can also fight at the frontlines without any issues due to its enhanced offensive capabilities. The Londo Bell flagship, Ra Cailum, that is carrying 12 Jestas for evaluation tests is also loaded with sufficient parts for converting 5 of them into the Jesta Cannon.

Mounted on the head, it contains a 60mm vulcan gun and is similar to the one used by the RGM-89 Jegan. The mounted vulcan gun has low firepower but a high rate of fire, it is extremely effective at restraining enemy machines, and can destroy the camera, sensors and joints of enemy machine at very close range.

Three hand grenades are carried in each of the four grenade racks mounted on the side of the waist and on the side of the legs. These throwing weapons are similar to the ones used by the Jegan, and can be launched directly from the rack, functioning as self-propelled projectiles. If required, one of the waist mounted racks can be replaced by an optional beam saber rack.

One of the strongest weapon of the Jesta Cannon, the beam cannon is mounted on the backpack, over the right shoulder. It is directly connected to the generator, allowing continuous fire at high-output. It is mainly used for medium-range support and functions in conjunction with a head-mounted high performance sensor unit.

A four barreled, multipurpose launcher mounted on the backpack, over the left shoulder. As implied by its name, the launcher is not only for dealing damage, it can also be loaded with special rounds such as flares depending on the combat situation.

The Jesta Cannon's beam rifle is the Jesta's standard beam rifle with expansion parts. The added parts include an aiming device fixed on the top of the barrel for increased accuracy, and a grenade launcher below the barrel. Besides the normal firing mode, it also has a beam machine gun-like rapid fire mode. The Jesta Cannon's beam rifle uses the same magazine connector as the Jegan and ReZEL's rifles, and three spare magazines are stored in the suit's right forearm.

The standard close range armament for most Federation mobile suits. The beam saber is a small device held in the mobile suit's hands when operated and is powered by a rechargeable energy capacitor. It emits a blade of plasma contained by an I-Field and can cut through most armor not treated with anti-beam coating. Due to the mounting of a shield on the left arm as part of the added armor, the Jesta Cannon's beam saber is stored on an optional rack that when mounted will replace one of the waist-mounted grenade rack.

A basic defense armament for many Federation mobile suits. The shield is a thick sheet of armor designed to take severe punishment that would normally destroy a mobile suit, and is also treated with an anti-beam coating to withstand several beam shots before the coating wears off. Typically, physical shields can only take so much damage before they succumb to the pressure and break. The Jesta Cannon is equipped with a shield fixed to the left arm as part of its extra armor, replacing the beam saber rack of the normal Jesta.

The backpack-mounted movable shield of the standard Jesta can also be mounted on the Jesta Cannon's backpack if required. However, this requires the removal of the beam cannon and the multi-launcher mount.

The standard Jesta shield possesses minor offensive capabilities as it is built with two 2-tube missile launchers. These missiles are not very effective against large ships, but are ideal mid-range anti-mobile suit weapons.

There is one confirmed Jesta Cannon in the Ra Cailum's MS team. In the novel, it was later transferred to the Dogosse Gier-class General Revil battleship, and was destroyed in the battle with MSN-06S Sinanju when approaching Industrial 7. 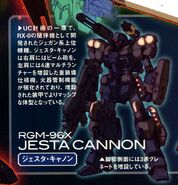