The RGM-96X Jesta is a mobile suit based on the RGM-89 Jegan, and it is introduced in Mobile Suit Gundam Unicorn.

The Jesta is a high performance special operations mobile suit of the Jegan series developed by Anaheim Electronics to escort the RX-0 Unicorn Gundam, as the Unicorn Gundam's operating time in its Destroy Mode is limited. Aside from escorting the Unicorn Gundam, the Jesta's intended mission also consisted of dispatching ordinary enemy forces, creating "situations" in which the Unicorn Gundam can directly confront and destroy enemy Newtype weapons.

The Jesta is fitted with a backpack capable of tremendous thrust so as to keep up with the Unicorn Gundam. Although the Jesta's weapon loadout is similar to the Jegan's, it features improved and more advanced weapons, such as the customized beam rifle and backpack-mounted movable shield, which like the Jegan's shield, contains four missiles. In addition to its advanced weaponry, the Jesta also carries three spare magazines for the beam rifle on the right forearm, and a beam saber on its left forearm.

Although intended to be an escort unit, the Jesta's performance surpasses most Federation mobile suits of its time, overwhelmingly exceeding the Jegan type of the same period, with its performance reaching 90% of the RX-93 ν Gundam's. The Jesta is essentially a product of the UC Project, however this fact has been kept hidden even within the Earth Federation Forces.

Mounted on the head, it contains a 60mm vulcan gun and is similar to the one used by the RGM-89 Jegan. The mounted vulcan gun has low firepower but a high rate of fire, it is extremely effective at restraining enemy machines, and can destroy the camera, sensors and joints of enemy machine at very close range.

Three hand grenades are carried in each of the grenade racks mounted on the side of the waist. These throwing weapons are similar to the ones used by the Jegan, and can be launched directly from the rack, functioning as self-propelled projectiles.

The standard close range armament for most Federation mobile suits. The beam saber is a small cylindrical device held in the mobile suit's hands when operated and is powered by a rechargeable energy capacitor. It emits a blade of plasma contained by an I-Field and is capable of cutting through almost any metal not treated with anti-beam coating. The Jesta has a beam saber stored on the mobile suit's left forearm.

A custom beam rifle with excellent rate of fire, it is longer than the usual beam rifle due to the installation of the acceleration/deflection device. Besides the normal firing mode, it also has a beam machine gun-like rapid fire mode. Accuracy can be improved by holding the rifle in a two-handed manner via the main and fore grip, and expansion parts can be fitted to grant additional capabilities. Like other beam weapons, the beam rifle's shots can penetrate any armor not treated with specific counter-measures. The Jesta's beam rifle uses the same magazine connector as the Jegan and ReZEL's rifles, and three spare magazine are stored on the right forearm. If required, Jesta can still use the standard beam rifle used by the Jegan.

A basic defense armament for many Federation mobile suits. The shield is a thick sheet of armor designed to take severe punishment that would normally destroy a mobile suit, and is also treated with an anti-beam coating to withstand several beam shots before the coating wears off. Typically, physical shields can only take so much damage before they succumb to the pressure and break. The Jesta's shield is mounted on a moveable arm attached to the backpack, and is positioned over the back while the mobile suit was on a sub-flight unit.

Similar to the Jegan's shield, the Jesta's shield also possesses minor offensive capabilities as it is built with two 2-tube missile launchers. These missiles are not very effective against large ships, but are ideal mid-range anti-mobile suit weapons. 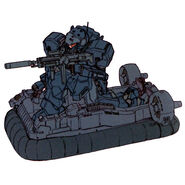 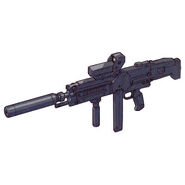 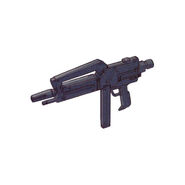 Tri Star Team's Jestas riding on Base Jabbers in space 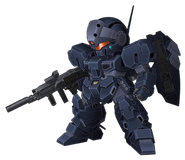 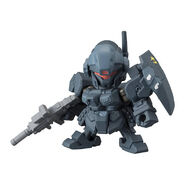