A state-of-the-art machine adopted by the Earth Federation Forces in U.C. 0089 as its main force mobile suit, the Jegan comes from the lineage of the RGM-79 GM as inferred by its "RGM" model number.[1][2] However, it was not developed by the Earth Federation Forces' own engineers like most previous RGM series mobile suit.[1][2] Instead, it was produced and supplied by the Anaheim Electronics (AE).[1][2] Created through combining the Earth Federation Forces' expertise of the GM series with AE's MS development technologies, the Jegan's performance is significantly higher than the RGM-86R GM III.[1][3] It also has improved productivity due to the use of Titanium Alloy Ceramic Composite armor, as well as high operability, and excellent versatility.[1][4] All these allows it to become the "next-generation standard MS", and it operated as the main force MS for a long period of time.[1][3][5] Several variations of the MS were also developed.[1] The original Jegan is sometimes referred to as "Jegan Type-A" to differentiate it from later variants, and should not be confused with the later RGM-89R Jegan A-Type.[6]

The Jegan highly exemplified the original concept of MS being "mobile infantry for melee combat", and is designed for close combat in and around space colonies.[1][4][5] It can also operate under gravity without any modifications.[5] With a backpack containing a single main thruster, two small thrusters at the bottom, and two articulated vernier arms at the top, the Jegan's thrust and acceleration performance could match-high mobility-type machines from the Gryps War-era.[1][5] Its backpack also featured exchangeable propellant tanks.[1][5] Also notable are the verniers for attitude controls on the front shoulder armor, enlarged centre shoulder armor sections to fit the side thrusters, and a calf-mounted thruster on each leg.[1] The use of lightened armor grants the machine high maneuverability, its front skirt armor is removed to maintain the legs' range of articulation, while its head has a long-range sensor installed in the forehead in addition to the fixed main sensors.[1][2][4] The Jegan is armed with mainly short-range weaponry, including a beam saber, a short-range type beam rifle, three hand grenades, a vulcan pod system, and a shield with twin missile launchers.[2][3]

A small machine gun mounted on the left side of the Jegan's head. It is developed from the RX-178 Gundam Mk-II's Vulcan pod, but is semi-fixed and much smaller.[4][5] It utilizes caseless rounds stored in a removable magazine located within the right side of the head.[4][5] It has low firepower but is extremely effective at restraining enemy machines, and can destroy the camera, sensors and joints of enemy machine at very close range.[4]

The Jegan has a beam saber stored in a rack on the right side of the waist, and its output can be adjusted as it has two beam emitters.[4][5] Via selecting the output and emitter, this close combat weapon can emit a flat beam blade for slashing, or a slim beam blade with high penetration ability.[5] The beam saber rack contains an accelerator equipped capacitor system for rapid recharge of the weapon.[5]

Three hand grenades are stored in the grenade rack mounted on the left side of the waist.[4][5] These close combat weapons can be thrown and timed to explode after several seconds as set by the pilot, or set to detonate when its sensors detect the metallic signal of extremely nearby enemy machines.[4][5]

The Jegan's main firearm. It has a short barrel for ease of handling, and is most effective in mid-close range combat due to its short firing range.[4][5] Although its output is reduced, it has an excellent rate of fire, and can eliminate enemy accurately during melee combat when utilized in conjunction with the composite sensor at the top of the rifle.[4][5] The Jegan's beam rifle is powered by a removable energy pack attached vertically in front of the grip.[1][7]

A standard defensive armament, it has anti-beam coating on its surface for defending against beam attacks, but the structure and materials focused more on repelling and deflecting incoming shots rather than withstand them.[5][8] The Jegan's shield has a swivel mount, and a pair of twin missile launchers.[4][5] The small missiles fired from these launchers have composite sensors in their tips, allowing them to home in onto their target even under the interference of minovsky particles in the battlefield.[4] However, they have a short range and are basically for use in close combat as they only carry a small amount of propellant.[4]

Wielded by a pair of purple Jegans in Gundam Build Divers, it is the same close combat weapon as used by the XM-01 Den'an Zon. Electromagnetic acceleration is utilized to drive its tip through the enemy's armor, and its spearhead can also be launched like a missile. To increase the shot lancer's combat effectiveness, it also mounts a pair of heavy machine guns.

In U.C. 0090 the E.F.F task force - "Knight Jeager", would use RGM-79V GM Night Seeker units retrofitted with parts of the Jegan, which was in its pre-development stage at the time. The Second Neo Zeon War in U.C. 0093 was the first major engagement in which the Jegan was deployed. There were less than 100 Jegans at that time, which were mainly used by the Londo Bell Task Force and the Luna II garrison, as the machine was still in its early stages of deployment. Despite this, the Londo Bell's Jegans played a pivotal role in the conflict. After the conflict, the Jegan became the mainstay mobile suit of the Federation Forces.

As with most mass-produced mobile suits, the Jegan was used as a basis for specialized units such as the RGM-89S Prototype Stark Jegan, which was capable of mounting large missiles -even nuclear warheads- and the special operations suit RGM-96X Jesta. Over its long period of service, the Jegan kept itself relevant through frequent upgrades. For example at the time of Crossbone Vanguard uprising in U.C. 0123, the Jegan, in the form of the RGM-89J Jegan Normal Type, was still more widely deployed than its more modern counterpart - the RGM-109 Heavygun.

A modified machine operated by the new "Hræsvelgr" corps under the command of Locke Hawker. It has the same head-mounted sensors as the RGM-89De Jegan (ECOAS Type), and is painted in blue and white. Appears in the manga "Mobile Suit Gundam U.C. 0096: Last Sun". 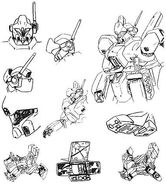 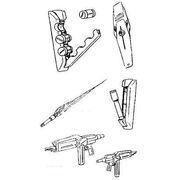 Jegans breaking off from Haunzen Flight 356 as it prepares for atmospheric re-entry.

Jegan Zondar as it appears in Battle of Sunrise 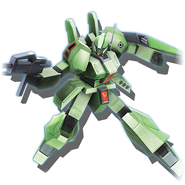 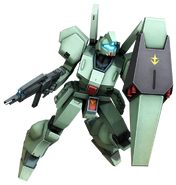 As seen on the game Mobile Suit Gundam Online 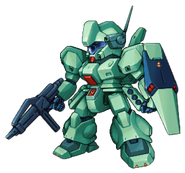 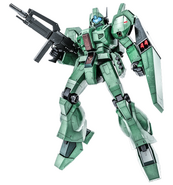 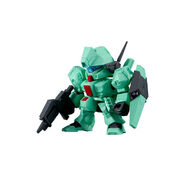