A special version of the RGM-89D Jegan D Type, the Stark Jegan has improved performance due to the additional armor and thrusters. It also incorporated feedback from its prototype, the RGM-89S Prototype Stark Jegan, and can mount missile pods on its shoulders for support use. Thus, it also inherited the functional concept of the RGM-86R GM III. When required, some of the added armor and the missile pods can be purged from for better mobility.

Mounted on the head, it is a close-range defensive armament. Its mounted vulcan gun fires 60mm rounds at a rapid rate and although it has low firepower, it is extremely effective at restraining enemy machines, and can destroy the camera, sensors and joints of enemy machine at very close range. The Stark Jegan typically mounts only a single vulcan pod system, but it can be fitted with two units when required.

For close combat, the Stark Jegan uses the same type of beam saber as the Jegan D Type, and the weapon's output can be adjusted as it has two beam emitters. Via selecting the output and emitter, the beam saber can emit a flat beam blade for slashing, or a slim beam blade with high penetration ability. Two beam sabers are stored in each forearm's additional armor and can be switched out for grenade launchers.

A grenade launcher can be mounted in the additional armor on each forearm in place of beam sabers.

The Stark Jegan can mount a triple missile pod on each shoulder for long range support, and it can be ejected after use to increase the suit's speed. The missiles fired have high accuracy due to the sensors in the missile pods. Due to changes in how the suit is used, the Stark Jegan's 3-tube Missile Pods are not meant to carry optional large missiles like the RGM-89S Prototype Stark Jegan.

The standard ranged armament of many mobile suits is the beam rifle. The Stark Jegan can use the beam rifle of the Jegan D Type. It has a short barrel for ease of handling, and is most effective in mid-close range combat due to its short firing range. Although its output is reduced, it has an excellent rate of fire, and can eliminate enemy accurately during melee combat when utilize in conjunction with the composite sensor at the top of the rifle.

Another type of beam rifle that the Stark Jegan could be equipped with. It is previously used by GM III, powered by a rechargeable energy cap and has a power rating of 2.8 MW.

The Stark Jegan can be equipped with the Jegan D Type's shield for increased defensive capabilities against physical and beam attacks. This shield also has a pair of twin missile launchers.

The small missiles fired from the pair of twin missile launchers have composite sensors in their tips, allowing them to home in onto their target even under the interference of minovsky particles in the battlefield. However, they have a short range and are basically for use in close combat as they only carry a small amount of propellant.

A handheld, wired grappling weapon that can be used to deliver crippling electrical shocks to enemy mobile suits. Its tip contains verniers that helped in controlling its trajectory.

Several years after the introduction of the mass production RGM-89 Jegan, it was upgraded into the RGM-89D Jegan D Type to bring its technology up-to-date. The RGM-89S Stark Jegan is a variant of the Jegan D Type, and is designed as an anti-ship mobile suit and for assault missions.

During the events of Mobile Suit Gundam Unicorn, one of these units (piloted by an unnamed veteran of the Second Neo Zeon conflict) is seen during Londo Bell's attempt to intercept the Garencieres on its way to the Industrial 7 colony but is destroyed in a heated battle with the NZ-666 Kshatriya. A second, piloted by Galom Gorga (call sign Juliet 002), is seen aboard the Nahel Argama instead equipped with two beam rifles that is later destroyed by the MSN-06S Sinanju. A third and fourth is seen during the Earth Federation's attack on the asteroid Palau alongside the RGM-89S Prototype Stark Jegan.

Appeared in episode 2 of Mobile Suit Gundam Unicorn OVA, it is a minor change version of the Stark Jegan. The front skirt armor and added armor on the arms, shoulders, and mouth are removed for improved mobility. Its side skirt armor carries three hand grenades on the left, and a beam saber on the right instead of spare magazines for the beam rifle.

A Stark Jegan's perspective of the Kshatriya and Funnels 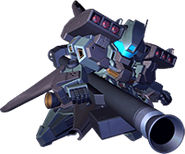 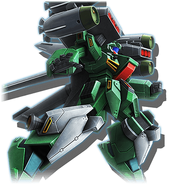 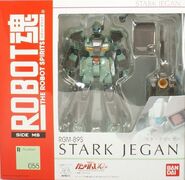 Retrieved from "https://gundam.fandom.com/wiki/RGM-89S_Stark_Jegan?oldid=465335"
Community content is available under CC-BY-SA unless otherwise noted.