The Prototype Stark Jegan is created by making drastic modifications to the original RGM-89 Jegan, and is meant for anti-ship combat. A small number were produced as functional testbeds for the RGM-89D Jegan D Type based RGM-89S Stark Jegan. Like the Stark Jegan, the Prototype Stark Jegan is fitted with additional leg armor and thrusters that can be ejected if needed. Among the differences between the prototype version and the standard model is that the prototype model is not as heavily armored. However, some of its body armor uses Gundarium Alloy making it more resistant to enemies projectiles. Secondly, the missiles used by the two units differ, with the prototype model capable of mounting four large anti-ship missiles. Lastly, the prototype model has a protruding chest due to it being a two-seater, while the standard model reverts back to needing only one pilot.

The machine cannons are chest-mounted shell firing weapons that have a high-rate of fire but have little power and are generally ineffective against mobile suits, though it can damage lightly armored areas such as the sensors. These weapons are ideal for shooting down small, lightly armored targets such as missiles or small vehicles.

Three hand grenades are stored in the grenade rack mounted on the left side of the waist. They can be thrown and timed to explode after several seconds as set by the pilot, or set to detonate when its sensors detect the metallic signal of extremely nearby enemy machines.

Like the original Jegan, the Prototype Stark Jegan stores a beam saber in a rack on the right side of the waist, and its output can be adjusted as it has two beam emitters. Via selecting the output and emitter, this close combat weapon can emit a flat beam blade for slashing, or a slim beam blade with high penetration ability. The beam saber rack contains an accelerator equipped capacitor system for rapid recharge of the weapon.

A triple missile pod can be mounted on each of Prototype Stark Jegan's shoulder, and ejected after used to increase the suit's speed. Furthermore, each missile pod may be equipped with two large missiles on the side. These large missiles can be anti-ship missiles tipped with nuclear warhead.

The standard ranged armament of many mobile suits is the beam rifle. The Prototype Stark Jegan can use the beam rifle of the original Jegan. It has a short barrel for ease of handling, and is most effective in mid-close range combat due to its short firing range. Although its output is reduced, it has an excellent rate of fire, and can eliminate enemy accurately during melee combat when utilize in conjunction with the composite sensor at the top of the rifle.

Another type of beam rifle that the Prototype Stark Jegan could be equipped with. It is first used by RGM-86R GM III, powered by a rechargeable energy cap and has a power rating of 2.8 MW.

The Prototype Stark Jegan can be outfitted with a handheld Hyper Bazooka that fires 380mm rounds. As with its human-sized counterpart, the bazooka fires explosive physical rounds at a high velocity that do significant damage on impact. Although it does not have the same penetrative power as a beam rifle, the bazooka does more extensive damage and is easily capable of destroying a mobile suit in one shot or break through the armor of a battleship.

In the Nahel Argama's hanger 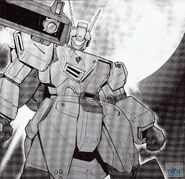 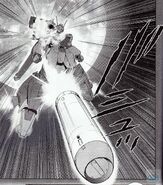 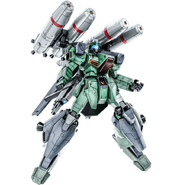 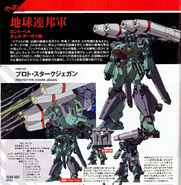