The RGM-89ST2 ST-Gun is a reconnaissance variant of the RGM-89J Jegan Normal Type that appears in the Mobile Suit Gundam F90 manga series. It is piloted by Navi.

A mobile suit modified from the Jegan J-Type that was given to SNRI free of charge from Anaheim Electronics. It was developed for the purpose of collecting data on the Gundam F90 and providing early warning of test airspace. The goggle sensors on the head have been enlarged, and a large radome, various sensors, and cameras have been added. Since it was originally designed for non-combat use, and considering the effect on the sensors, it is equipped with only self-protection-level projectiles, so its firepower has been reduced. Because it is equipped with many expensive observation sensors, its production cost is as high as eight Jegan J-Type machines.

A special grenade with six shots, three on each hip. The propulsion unit is located at the rear, so it can be fired directly without being held in the hand.

One ST-Gun was part of the Federation's 13th independent mobile corps when it was assigned to travel to Mars to combat the Oldsmobile Army. After the Mars Zeon ambush in space the ST-Gun, piloted by Navi, was one of the few survivors to make it to the surface along with a modified AMS-119S Geara Doga Kai piloted by Sid Amber and the F90 Gundam F90 piloted by Def Stallion. The three would combat the Mars Zeon ground forces however in the first battle the ST-Gun would be heavily damage, rendering it unable to move. This allowed Mars Zeon forces to capture the ST-Gun. Navi would be rescued but the ST-Gun would be lost when the base was destroyed. 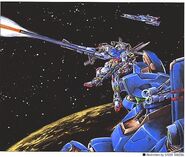 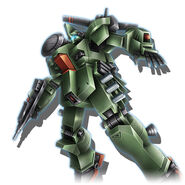