The Jegan Fireball uses mostly the same main body as the RGM-89R Jegan A-Type, but has two arm-mounted grenade launchers instead of one and a different backpack. Its backpack consisted of two large thrusters, two medium thrusters and a pair of vernier arms at the top that have two thrusters each.

A rapid-fire, close-range defensive armament mounted on the left side of the Jegan Fireball's head. Low offensive power, only used to restrict enemy movement, and lay down a wall of suppressive fire.

Equipped on the both forearms, the grenades fired are moderately powerful self-propelling explosives that can deal significant damage to a mobile suit.

A beam weapon for close combat. It is a small device held in the mobile suit's hands when operated and is powered by a rechargeable energy capacitor. It emits a blade of plasma contained by an I-Field and can cut through any armor not treated with anti-beam coating. The Jegan Fireball has two beam sabers, one stored in each side armor.

The Jegan Fireball was only seen briefly during a flashback. It was piloted by Iris Orlando's father in a performance test conducted in February of U.C. 0112 in North America. Unfortunately, the Jegan Fireball's backpack malfunctioned during the test and Captain Orlando was killed in the ensuing explosion that also destroyed the mobile suit. 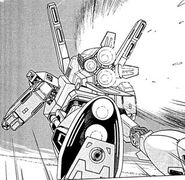 Close up of backpack