The RGM-89J Jegan Normal Type (aka Jegan Type J) is a mobile suit that appears in the Mobile Suit Gundam F91 movie.

The RGM-89J Jegan Normal Type is an upgraded version of the old RGM-89 Jegan that took over as the basic Jegan model by U.C. 110. It has increased generator output and its sensors as well as drive system have also been slightly tuned up. Although the stick-type control system has become the mainstream in the U.C. 120s, this machine continues to use the arm raker mechanism, and is considered to be the last MS to use this mechanism. Externally, it differs only slightly from the initial mass production type in its backpack, dedicated beam rifle, and shield.

A rapid-fire, close-range defensive armament mounted on the left side of the Jegan Normal Type's head.

A beam weapon for close combat. It is a small device held in the mobile suit's hands when operated and is powered by a rechargeable energy capacitor. It emits a blade of plasma contained by an I-Field and can cut through any armor not treated with anti-beam coating. A single unit is stored in the right side armor.

Three hand grenades are stored in the grenade rack mounted on the left side of the waist.

A new beam rifle that is the main weapon of this machine. It has a higher output than the previous version, and the shape of the E-pack has been changed.

A standard defensive armament to protect against physical attacks and has anti-beam coating on its surface for defending against beam attacks. The Jegan Normal Type's shield has a swivel mount and a pair of quadruple missile launchers.

During the invasion of the Frontier Side by the Crossbone Vanguard in U.C. 0123, the Jegan Normal Type was deployed alongside newer mobile suits, the RGM-109 Heavygun, and F71 G-Cannon, but they were easily outclassed by the enemy's new mobile suits. 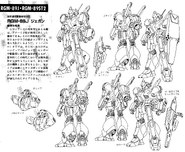