The RGM-89De Jegan [ECOAS Type] (aka Jegan "Four Eyes") is a special operations mobile suit based on the RGM-89D Jegan for use by ECOAS. It first appeared in the OVA series Mobile Suit Gundam Unicorn.

The RGM-89De Jegan [ECOAS Type] is a special version of the RGM-89D Jegan D Type used by the Earth Federation's special task group ECOAS, and are deployed in ECOAS missions that are expected to involve direct combat with mobile suits. It has a special visor and extra chest armor for increased survivability. The ECOAS Type features the same armaments as the normal Jegan, consisting of a beam saber, a beam rifle, a three slot hand grenade rack, and a shield that has two two-tube missile launchers built in. It could also be outfitted with a bazooka for increased firepower and custom units with different weaponry also exist.

Three hand grenades are carried in the grenade rack mounted on the left side armor. They can be thrown and timed to explode after several seconds as set by the pilot, or set to detonate when its sensors detect the metallic signal of extremely nearby enemy machines. Replaced by a different kind of grenade on Conroy Haagensen's unit.

The Jegan [ECOAS Type] used by Conroy Haagensen has a different grenade rack from that of the standard unit, and it holds a special kind of grenade known as "Fire Nut". Originally featured on RX-77-3 Guncannon Heavy Arms Type, it can be hand-thrown like regular grenade, and upon impact with the target, would engulf it in flames.

Like the Jegan D Type, the Jegan [ECOAS Type] stores a beam saber in a rack on the right side of the waist, and its output can be adjusted as it has two beam emitters. Via selecting the output and emitter, this close combat weapon can emit a flat beam blade for slashing, or a slim beam blade with high penetration ability. The beam saber rack contains an accelerator equipped capacitor system for rapid recharge of the weapon.

Besides the standard beam saber stored in the right side armor, Conroy's Jegan has another beam saber integrated into a box-shaped device mounted on its right forearm for quick deployment.

A portable, physical projectile-type firearm, this general purpose bazooka was used by the Jegan and other Earth Federation Forces' mobile suits in the mid U.C.0090s. A spare ammunition cartridge is mounted in front of the bazooka's grip, and the weapon is compatible with various types of warhead. Despite the relatively slow speed of the bazooka's projectiles, they have sufficient destructive power to deal critical damages to a mobile suit.

A basic arm-mounted defense armament for many Federation mobile suits, it is used to protect against physical attacks and has anti-beam coating on its surface for defending against beam attacks. The Jegan [ECOAS Type] uses the same shield as the Jegan D Type, which has a swivel mount and a pair of twin missile launchers.

A pair of twin missile launchers are mounted in the Jegan [ECOAS Type]'s shield. They fire small missiles that have composite sensors in their tips, allowing them to home in onto their target even under the interference of minovsky particles in the battlefield. However, they have a short range and are basically for use in close combat as they only carry a small amount of propellant.

The standard ranged armament of many mobile suits is the beam rifle. The Jegan [ECOAS Type] uses the same beam rifle as the Jegan D Type. It has a short barrel for ease of handling, and is most effective in mid-close range combat due to its short firing range. Although its output is reduced, it has an excellent rate of fire, and can eliminate enemy accurately during melee combat when utilize in conjunction with the composite sensor at the top of the rifle.

Another type of beam rifle that the Jegan (ECOAS Type) could be equipped with. It is previously used by the GM III, powered by a rechargeable energy cap and has a power rating of 2.8 MW. Conroy used this beam rifle once in Episode 7.

A close range weapon used by Conroy's Jegan (ECOAS Type), it is a shorter version of the Jegan's beam rifle, but can still penetrate enemy mobile suit's armor. It can be fired in rapid fire mode. Conroy typically use the handgun when his Jegan's special visor is activated for better accuracy. It is stored on the Jegan's lower left leg's hardpoint when not in use.

Used by Conroy's Jegan (ECOAS Type), this physical blade is stored in a sheath located on the left shoulder. It is stored with its handle facing downwards to facilitate drawing of the weapon during close combat. During the encounter with the Neo Zeong, the Dagger Knife is used to cut the wires of the wired large funnel bits.

Created during the Gryps War, the mega bazooka launcher is the most powerful class of beam weapon used by mobile suits. It is a large mega particle cannon with firepower exceeding that of a warship's guns. Instead of being carried by a mobile suit into battle (like in the Gryps War), the mega bazooka launcher used by Conroy's Jegan (ECOAS Type) is stationed on the Nahel Argama's deck. It serves as a a replacement for a damaged main cannon on the ship, and is powered using that damaged cannon's power supply. With his Jegan (ECOAS Type)'s Precision Firing Sensor, Conroy would use the launcher for long range sniping.

Mounted on the head, the special visor lowers and covers the normal visor of the suit when in use. This special visor is equipped with additional sensors, granting the suit better firing accuracy in mid to long range battle. The visor also improves the suit's ability to search and detect enemy units.

The special visor of Conroy's Jegan(ECOAS Type) has an additional precision firing sensor located in the centre. This additional sensor further improves the suit's firing accuracy.

Two RGM-89De Jegan (ECOAS Type) were first seen accompanying the Unicorn Gundam toward the wreckage of Laplace. The mobile suits were also seen taking action against the Sleeves interception attack on Laplace. Lieutenant Commander Conroy Haagensen used his unit to great effect during the battle, shooting down a AMX-102 Zssa and MS-14J ReGelgu in defense of the Nahel Argama. 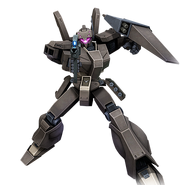 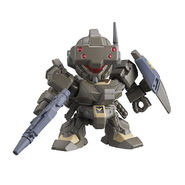 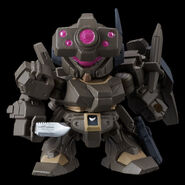 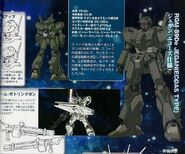