The RGM-89D Jegan D Type is an improved version of the RGM-89 Jegan and uses similar weaponry. It features upgrades in performance and is designed to mount additional equipment on its body, with mount latches present on the shoulder armor and front of the waist. Typically, teams of these Jegans would work in concert with more advanced Federation mobile suits such as the RGM-89S Stark Jegan, the RGZ-95 ReZEL, and the RGZ-95C ReZEL Commander Type.

As with the original Jegan, the Jegan D Type can mount a vulcan pod system on the left side of its head as a close-range defensive armament. It utilizes 60mm rounds stored in a removable magazine located in the right side of the head, but these rounds are not caseless like the original Jegan's and their cases are ejected from the top of the vulcan pod system after firing. The mounted vulcan gun has low firepower but a high rate of fire, it is extremely effective at restraining enemy machines, and can destroy the camera, sensors and joints of enemy machine at very close range.

Inherited from the original Jegan, three hand grenades are stored in the grenade rack mounted on the left side of the waist. They can be thrown and timed to explode after several seconds as set by the pilot, or set to detonate when its sensors detect the metallic signal of extremely nearby enemy machines.

Like the original Jegan, the Jegan D Type stores a beam saber in a rack on the right side of the waist, and its output can be adjusted as it has two beam emitters. Via selecting the output and emitter, this close combat weapon can emit a flat beam blade for slashing, or a slim beam blade with high penetration ability. Its output can also be concentrated into a knife-like beam blade for penetrating the tough armor of allied unit without causing lethal damages. The beam saber rack contains an accelerator equipped capacitor system for rapid recharge of the weapon.

A portable, physical projectile-type firearm, this general purpose bazooka was used by the Jegan and other Earth Federation Forces' mobile suits in the mid U.C.0090s. A spare ammunition cartridge is mounted in front of the bazooka's grip, and the weapon is compatible with various types of warhead. Despite the relatively slow speed of the bazooka's projectiles, they have sufficient destructive power to deal critical damages to a mobile suit.

A standard ranged armament of many mobile suits is the beam rifle. The Jegan D Type uses the same beam rifle as the original Jegan and is powered by a removable energy pack attached vertically in front of the grip. It has a short barrel for ease of handling, and is most effective in mid-close range combat due to its short firing range. Although its output is reduced, it has an excellent rate of fire, and can eliminate enemy accurately during melee combat when utilized in conjunction with the composite sensor at the top of the rifle.

The same beam rifle used by the RGZ-95 ReZEL, which is powered by a replaceable energy pac. The particle beam fired from the beam rifle can penetrate almost any armor that has not been treated with specific counter-measures. Lastly, the beam rifle's muzzle can generate a beam blade, allowing the rifle to function as a long beam saber.

The same beam rifle used by the RMS-106 Hizack and RMS-108 Marasai, it is powered by a replaceable e-pac and is power rated at 2.2 MW.

A standard defensive armament for many Federation mobile suits, it is used to protect against physical attacks and has anti-beam coating on its surface for defending against beam attacks. The Jegan D Type uses the same shield as the original Jegan's, which has a swivel mount and a pair of twin missile launchers.

A pair of twin missile launchers are mounted in the Jegan D Type's shield. They fire small missiles that have composite sensors in their tips, allowing them to home in onto their target even under the interference of minovsky particles in the battlefield. However, they have a short range and are basically for use in close combat as they only carry a small amount of propellant.

Several years after the introduction of the RGM-89 Jegan, its design was overhauled and given a package of basic upgrades to bring its technology up-to-date and relevant when compared to the newer high-performance machines being issued to special forces such as the RGZ-95 ReZEL. This upgraded model, known as the RGM-89D Jegan D Type, would be used in UC 0096 against the The Sleeves and combat their mobile suits.

The initial production version of the Jegan D Type, it was first seen used in UC 0094. There is no difference in performance, but it was unpopular with pilots because its two-tone color scheme of red and white made the machine too noticeable. 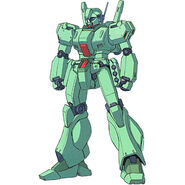 Camouflage Ver. at Cheyenne Base 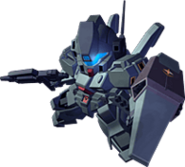 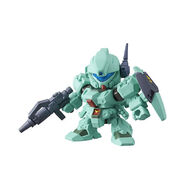