The RGM-89A2 Jegan Type-A2 (GR) is a variant of the RGM-89 Jegan introduced in the Mobile Suit Gundam Unicorn OVA series.

A Jegan variant deployed exclusively by the General Revil, the Jegan Type-A2 (GR) is designed with better overall performance. It has undergone significant renovation, particularly the enhancement of its propulsion system's output and the addition of more thrusters on its legs and backpack, leading to better mobility. It uses the same weaponry as the original Jegan, but has a new shield with two 4-tube missile launchers built in and a vulcan pod system with added sensor unit.

As with the original Jegan, the Jegan Type A2 can mount a vulcan pod system on the left side of its head as a close-range defensive armament. However, the Jegan Type A2's vulcan pod system has an added sensor unit. The mounted vulcan gun has low firepower but a high rate of fire, making it extremely effective at restraining enemy machines, and can destroy the camera, sensors and joints of enemy machine at very close range. They are also ideal for shooting down missiles, etc.

Inherited from the original Jegan, three hand grenades are stored in the grenade rack mounted on the left side of the waist. They can be thrown and timed to explode after several seconds as set by the pilot, or set to detonate when its sensors detect the metallic signal of extremely nearby enemy machines.

Like the original Jegan, the Jegan Type A2 stores a beam saber in a rack on the right side of the waist, and its output can be adjusted as it has two beam emitters. Via selecting the output and emitter, this close combat weapon can emit a flat beam blade for slashing, or a slim beam blade with high penetration ability. The beam saber rack contains an accelerator equipped capacitor system for rapid recharge of the weapon.

The standard ranged armament of many mobile suits is the beam rifle. The Jegan Type A2 uses the same beam rifle as the original Jegan. It has a short barrel for ease of handling, and is most effective in mid-close range combat due to its short firing range. Although its output is reduced, it has an excellent rate of fire, and can eliminate enemy accurately during melee combat when utilize in conjunction with the composite sensor at the top of the rifle.

A basic arm-mounted defense armament for many Federation mobile suits, it is used to protect against physical attacks and has anti-beam coating on its surface for defending against beam attacks. The Jegan Type A2 uses an enlarged version of the original Jegan's shield, and its built-in missile launchers are upgraded from a pair of twin missile launchers into two 4-tube missile launchers. The small missiles fired from these launchers have a short range as they only carry a small amount of propellant.

A sizable number of Jegan Type-A2 (GR) units were deployed by the Dogosse Giar-class, General Revil during its ambush of the SCVA-76 Nahel Argama and Garencieres in U.C. 0096. However, many of them were intercepted and disabled by the YAMS-132 Rozen Zulu and MSN-06S Sinanju.

In U.C 0097, the General Revil was dispatched to the Helium-3 storage base to destroy the Republic of Zeon's Chivvay-class cruiser Gulltoppr, believing it to be operated by Sleeves remnants. Jegan Type-A2 (GR) units were among the mobile suits deployed by the General Revil to engage Zoltan Akkanen's NZ-999 II Neo Zeong. Most of them were annihilated by the II Neo Zeong along with their mothership, though some of them managed to survived the first wave of the attack. These surviving Jegan Type-A2 (GR) units later launched their own attack on the gaps of the II Neo Zeong's I-Field, before they were hijacked by the II Neo Zeong and used by Zoltan against the RX-0 Unicorn Gundam 03 Phenex.

Attacked while riding a Type 89 Base Jabber

Damaged together with Type 89 Base Jabber

Launching from the Genera Revil

Stabbed by the Sinanju 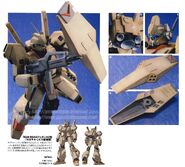 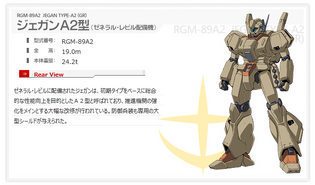 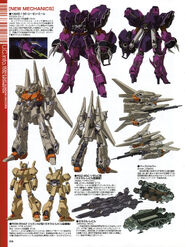