The RGM-88X Jeddah (or Jeda) is a mobile suit appearing in the novel Mobile Suit Gundam High-Streamer. It was later redesigned for the Mobile Suit Moon Gundam manga.

A prototype of the Jegan, the Jeddah incorporated many of the same technologies used in the RX-178 Gundam Mk-II. Its backpack design was almost the same as the Mk-II, though it had a lower output. However, due to major cuts to the Earth Federation Forces' mobile suit development budget, only six prototype units were constructed, though minor variations based on the Jeddah continued to be manufactured.[1]

In Moon Gundam, the Jeddah (now romanized as "Jeda") was said to be one of the multiple mass production proposals for the Jegan. It possessed a head-mounted radome, a more advanced head sensor, a backpack thruster layout closer to the Gundam Mk-II, and additional thrusters, including a pair of large thrusters mounted on the rear skirt. The main armament is a beam rifle equipped with a composite sensor and it has the same performance as the one used by the Gundam Mk-II. The shield can switch between an expanded state and a collapsed state, and the tip adopts a hard material allowing it to serve as a striking weapon.

Initially developed by Anaheim Electronics at the request of the Federation following the adoption of several AEUG models, following the Gryps War. Development began during the First Neo Zeon Movement. The Jeddah became the main mobile suit used by the Londo Bell special forces unit, before eventually being replaced by the Jegan. Production versions delivered to Federation bases were redesignated as the RGM-90 Jeddah Improved Type (ジェダ改良型, RGM-90 Jeddah Improved Type?).[1]

Due to the Earth Federation Forces's large budget cuts, the Jeddah was refined into the more cost-efficient Jegan by U.C. 0092. However, several mass production examination units were assigned to the Londo Bell ship Ra Zyme, piloted by Amuro Ray's mobile suit team. 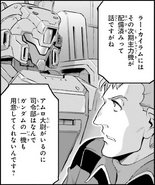 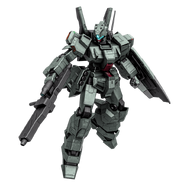