A mass-produced mobile suit of the Earth Federation Forces developed in accordance with the "GM III Plan" as a successor to the GM II. It was deployed as the main unit during the First Neo Zeon War. By actively introducing new technologies while maintaining productivity, some specs have acquired performance equal to or higher than Gundam Mk-II's. Its backpack is a mass production model of the Gundam MK-II's, and mobility and maneuverability have exceeded the level of existing mass production machines. Although this backpack has a slightly different shape, it maintains the same functions as the Mk-II's while improving cost performance, and the docking mechanism with the FXA-05D G-Defenser remains. The shoulders and waist can be equipped with missile pods and missile launchers, respectively, allowing the GM III to function as an MS for medium- and long-range support.

The beam saber is a small device held in the mobile suit's hands when deployed and is powered by a rechargeable energy capacitor. It emits high-energy Minovsky particles to form a blade-shaped I-field (via manipulation of electromagnetic fields), and then fills this I-field shell with superheated Minovsky particle plasma to produce an effective cutting blade. The GM III has two beam sabers stored in the backpack. It has the same shape as the Gundam Mk-II's, but a standard mass-produced beam generator is used.

An optional missile pod can be outfitted on each shoulder. Each pod has its own sensors for improved accuracy, and carries four medium-sized missiles. Can be ejected when not required, and is also known as 'Normal Missile Pod'.

An alternate shoulder-mounted missile pod, it is loaded with 15 micro-missiles that are arranged in three rows of five. Can be ejected when not required.

A spear-like weapon with several beam blades at the top. Due to its long handle, the weapon has a long reach, providing a considerable advantage in close quarters combat. It can also be used as a throwing weapon. Unlike the one used by the the Gundam, this model is a mass produced version and its handle cannot retract for functioning as a beam saber.

An updated version of the BR-S-85-C2 Beam Rifle used by GM II and Nemo. Its appearance and manufacturing cost are almost the same as the older version's, but it output is increased by about 50% to 2.8MW. However, its usability has not been improved, and issues about its endurance remains.

A portable, mobile suit-use 90mm rifle built based on the 'system weapon' structure, its effective range and accuracy are superior to the HWF GMG·MG79-90mm machine gun. With the extended barrel, the GM Rifle sees a 15% increase in muzzle velocity, leading to increased armor penetration capability. Additionally, a newly developed caseless cartridge allows for a lightened ammunition load.

A projectile weapon designed for amphibious combat. The harpoon gun fires four harpoons one by one in a rotary manner similar to a revolver. The tip of each harpoon is loaded with explosives that detonate once the projectile has penetrated the enemy's armor.

A basic defensive armament used by the Federation's GM type MS since the One Year War. Although various improvements have been made over the years, its overall appearance and shape has remained the same.

An alternate shield used by the GM III deployed by the U.C 0090s, it is the same shield as used by the RGM-89 Jegan. The shield has a pair of twin missile launchers. They fire small missiles that have composite sensors in their tips, allowing them to home in onto their target even under the interference of Minovsky particles in the battlefield. However, they have a short range and are basically for use in close combat as they only carry a small amount of propellant.

The last upgrade of the Earth Federation Forces's well-established RGM-79 GM mobile suit series, the RGM-86R GM III was a much needed improvement for the GM series, as the GM II was largely outdated by the mid-to-late U.C. 0080s. The GM III was introduced in U.C. 0088, during the First Neo Zeon War. It proved to be a success and would see service into the U.C. 0090s as the mainstay mobile suit in the Earth Federation's military forces.

In the U.C. 0090s, the GM III was being slowly replaced by the new RGM-89 Jegan series. Despite this, during the Second Neo Zeon War, several GM IIIs were deployed by the Earth Federation Forces's 88th Fleet to assist in stopping Axis from dropping onto Earth. By U.C. 0096, some GM IIIs were still in service, and fought against the Zeon remnant forces during the attack of Dakar, and later at the Torrington Base.

In the U.C. 112, a mercenary group called Gleam Black Guns (GBG) was hired by Oiel Raddegger to assist him in stealing data from F90 Team B's test mission. The GBG's customized GM IIIs along with Tigris managed to inflict heavy damage to Team B, destroying several Gustav Karls and Heavyguns, and heavily damaging F90 Unit 2, resulting in Team B's disbandment.

In U.C. 112, the GM III was considered obsolete and all units were phased out by the Earth Federation Forces, but a mercenary group called Gleam Black Guns (GBG) used them as their primary fighting force. The GM IIIs operated by GBG were enhanced using contemporary MS parts, enabling them to achieve comparable performance with current EFF MS, especially miniaturized MS like RGM-109 Heavygun and F90 Gundam F90. Each unit was painted in pitch black for stealth purposes and to make them hard to spot by MS's camera. Each unit was also customized according to its pilot's preferences such as using Jegan's Shield with Beam Sabers attached to it, equipping RGM-89S Stark Jegan's backpack, and using FA-78-1 Full Armor Gundam's armor and Twin Beam Rifle. With these enhancements, they managed to deal significant damage to F90 Team B, resulting in the latter's disbandment.

Front and back view

RGM-86R+FXA-05D GM III Defenser as seen on Advance of Zeta The Traitor to Destiny Extra Compilation: Mace of Judgment 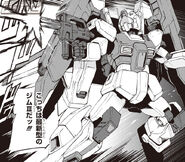 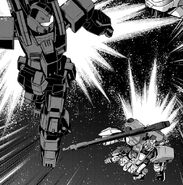 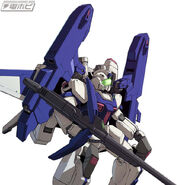 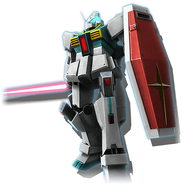 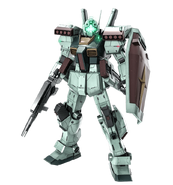 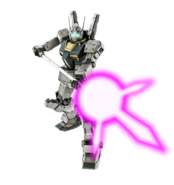