The RGM-79 Powered GM is a RGM-79C GM Type C modified with advanced parts to test their functionality for use in future mobile suits. Many of its new components are in the form of a backpack system that incorporates a more powerful reactor and more powerful thrusters, granting the Powered GM significantly greater mobility. Its leaping height and speed greatly surpassed that of the MS-06F2 Zaku II F2 Type. Because of the stress the mobile suit's legs receives when landing from such heights, which is more than what the original GM Type C can achieve, the Powered GM has new shock absorbers in the knees.

These shell firing weapons have high rate of fire but little power, however, they are effective at close range and are commonly employed to deter an enemy mobile suit from getting too close. They are also ideal for shooting down small, lightly armored targets such as missiles, attack vehicles, etc.

The standard close range armament for most mobile suits, it is a small device held in the mobile suit's hands when operated and is powered by a rechargeable energy capacitor. The beam saber emits a blade of plasma contained by an I-Field and can cut through most armor not treated with anti-beam coating. The Powered GM is equipped with a single beam saber stored in the left side of the backpack.

The RGM-79 Powered GM was built in U.C. 0083 and at least two units were known to exist and stationed at Federation's Torrington Base in Australia, where one of them was assigned to test pilot Dick Allen. The Powered GM was deployed in mock battles against multiple MS-06F2 Zaku II F2 Type for data gathering purposes, typically ending in victory without Allen having pushed the machine to its limits. On October 13 U.C. 0083, the Torrington Base was attacked by members of the Delaz Fleet. Both Powered GMs sortied against the enemy mobile suits, with Allen's unit assigned to one of the teams pursuing the stolen RX-78GP02A Gundam "Physalis". However, Allen's Powered GM was ambushed and destroyed by Adamski's MS-09F/trop Dom Tropen. Another damaged Powered GM was seen at the devastated Torrington Base.

One of the destroyed Powered GMs in the Torrington Base. 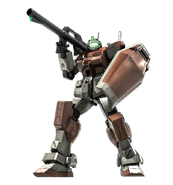 Retrieved from "https://gundam.fandom.com/wiki/RGM-79_Powered_GM?oldid=446426"
Community content is available under CC-BY-SA unless otherwise noted.