The RGM-79V GM Night Seeker is a variant of the RGM-79 GM. It appeared as a part of the MSV-R and MSV-R: The Return of Johnny Ridden.

The RGM-79V GM Night Seeker is an Earth Federation mobile suit specialized in night attacks. The GM Night Seekers are dropped on Zeon military bases using a CB-X5SGT Gunperry Sturm Type. It is not equipped with a parachute pack like the RX-79(G) Gundam Ground Type, but has extra thrusters instead for a quicker landing and a smaller chance of being spotted. These thrusters also improve the mobile suit's mobility and allow it to jump to a height of 400m to return to the transport squadron after the completion of a mission. The GM Night Seeker's sensor range can be increased via the equipping of targeting sensors in the "face guard" visor over its standard sensors. The GM Night Seeker's main weapons are a beam saber, head mounted vulcan guns and a beam spray gun.

A beam weapon for close combat. It is a small device held in the mobile suit's hands when operated and is powered by a rechargeable energy capacitor. It emits a blade of plasma contained by an I-Field and can cut through any armor not treated with anti-beam coating. The GM Night Seeker has a beam saber stored in the left side of the backpack.

A spear-like weapon with several beam blades at the top. Due to its long handle, the weapon has a long reach, providing a considerable advantage in close quarters combat. It can also be used as a throwing weapon.

A handheld mega-particle gun with a lower focusing rate than a beam rifle and short range. The beam spray gun featured three fire modes: a basic single shot mode, an area suppression burst shot with a widened beam focus, and a range shot with the ability to cause damage over a wide area. Output 1.4 MW.

The bullpup machine gun was a system weapon developed as a Space/Ground dual use projectile weapon. Though compact, it has sufficient anti-MS firepower while maintaining accuracy. Its muzzle velocity is increased due to the use of new gunpowder and this enables it to easily penetrate the armor of Zeon's mobile suit. A box-like sensor system incorporating a video camera and laser sensor is installed at the top, and when this system is used alongside the GM Night Seeker's targeting system, target acquisition capability is enhanced.

Mounted on the side of the head, the marker pod is capable of transmitting orders under Minovsky Particle interference through multiple means, including visible light and infrared signals. It is mainly equipped on commander units, while other GMs of the same unit are equipped with sensor pods that act as receivers.

In Mobile Suit Gundam 0083 Rebellion, several GM Night Seeker belonged to the Special Forces were launched from a carrier on Gunperry aircraft into the coast of Australia in order to stop Anavel Gato and the RX-78GP02A Gundam "Physalis" from escaping by a Zeon submarine. They tried to corner Gato with their beam javelins; however, the Zeon Ace's talent and power of the new Gundam were too overwhelmed, and they were destroyed with ease.

Special battalion unit pilot by Captain Vasuki. Unlike the GM-based One Year War unit, the GM III was used and various improvements were made to it. It should have been called "RGM-86RV" but, after the Federation internal conflict (Gryps War), it is thought that for special missions, in an effort to deceive the enemy, they dared not change even the friendlies' IFF signal.

In MSV-R Return of Johnny Ridden 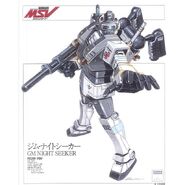 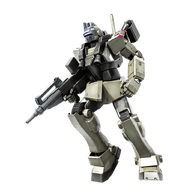 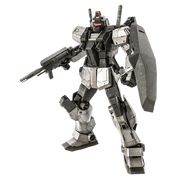