The RGM-79U GM Sloep is the first amphibious mass-produced mobile suit developed by the Earth Federation Army. It first appeared as a part of the MSV-R line.

The advent of the Principality of Zeon's amphibious mobile suit was a far greater than the Federation Army could have anticipated. Because the Federation did not have an effective countermeasure against this, they decided to develop optional equipment that would take advantage of the versatility of the RGM-79 GM. It was equipped with an underwater backpack and an auxiliary ballast tank on each of the legs, allowing underwater activities. There was no difference in the appearance of the GM as the base, but some were subjected to pressure-resistant processing. To dive underwater, seawater is injected into the ballast tanks. However, this machine has a slight buoyancy even when the ballast tanks are full, so it was designed to dive using the "dynamical dive method," which uses thrust and a diving rudder. Since the GM didn't have built-in underwater sensors, it was equipped with a periscope-style sensor pod and a handheld sonar gun instead.

A pair of shell-firing armament built into the head. They have low firepower, but are ideal for shooting down small, lightly armored targets such as missiles or attack vehicles due to their high rate of fire.

A wired sensor pod mounted on the back. The pod can be ejected from a point at a depth of 45 meters to obtain information on the sea surface.

A small portable sonar developed for mobile suits because it was not possible to secure space for mounting a sonar on the machine.

The plans for the GM Sloep were put into production and rolled out in November of U.C. 0079, but the plan for this machine was ultimately rolled into the RAG-79 Aqua GM and the existing GM Sloep units were converted back into regular GMs. Only two were left as testbeds for the development of an amphibious MS, and were used for data collection, but these two were also dismantled later. 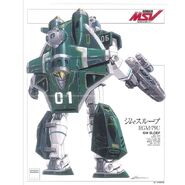