The GM Spartan was developed using the frame of the GM Command series, and is mainly for ground combat in the jungles of subtropical regions. It has added armor on the chest and shoulders as they are considered to be more exposed to enemy attacks, compared to the lower body which tends to be concealed by the trees. To compensate for the added weight, it has a backpack with higher thrust. As the added armor and higher thrust produced excellent results, similar measures are adopted for the RGM-79SP GM Sniper II that was developed later. In addition to weapons that emphasize anti-MS combat in close-range, the GM Spartan also has various equipment to improve concealment, such as infrared shielding sheet, Minovsky particle scattering pod, and smoke dischargers.

A set of three grenades seem to be stored on the right side skirt armor.

The GM Spartan was known to have been deployed by the 2nd Special Platoon of the 17th Armored Marine Division in the Southeast Asia front, during the Borneo landing operation (December UC 0079). In addition, there was a GM Spartan unit operated by Karaba during the Gryps War. 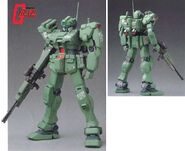 Retrieved from "https://gundam.fandom.com/wiki/RGM-79S_GM_Spartan?oldid=498076"
Community content is available under CC-BY-SA unless otherwise noted.