The RGM-79SC GM Sniper Custom was an advanced variant of the GM Series mainly used by veteran pilots. Less than 50 units were built, and they were frequently modified based on their pilot's preferences, leading to various custom units being identified on the battlefield. The GM Sniper Custom (Shimoda Squad Type) is an example. It is armed with additional missile launchers to enhance its weaponry, and its backpack is modified with additional thrusters for higher mobility.

A standard beam spray gun could be stored on a storage rack on the calf of the GM Sniper Custom (Shimoda Squad Type). The beam spray gun featured three fire modes: a basic single shot mode, an area suppression burst shot with a widened beam focus, and a range shot with the ability to cause damage over a wide area. Output 1.4 MW.

A box-shaped device mounted on the right forearm capable of emitting a beam blade. The beam saber within the box can be taken out and used as a handheld weapon.

Model number: BR-M79-L3
A beam rifle designed specifically for the GM Sniper Custom, range and output have been increased, but it has a smaller ammo capacity. When used by the GM Sniper Custom, its effective range greatly exceeds the range of the RX-78-2 Gundam's beam rifle. It shares the same frame structure as the standard beam spray gun. The rifle's barrel, stock, and scope can be folded when not in use.

An optional MS-use Bazooka developed for the GM Series. Besides having enhanced accuracy due to the sensor mounted on top of the weapon, it is also lightweight, easy to use and has high shooting performance. 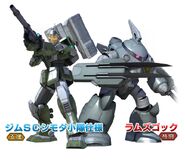