The RGM-79SC GM Sniper Custom is a variant of the mass production RGM-79 GM and was first featured in the original design series Mobile Suit Variations (MSV).

Unsatisfied with the performance of the RGM-79 GM, a number of Federation ace pilots requested an improved version of the mobile suit. As a result, two modified GM variants were produced: the GM Light Armor and the GM Sniper Custom.[1] Despite its name, the GM Sniper Custom is not dedicated to sniping, rather it is an "omnipotent" unit capable of close-range combat to medium-range support due to its additional thrusters.[2]

Compared to the base GM, the GM sniper Custom featured more powerful thrusters on its backpack, which rival the RX-77-2 Guncannon in terms of output; additional high-output thrusters on the back of the leg; a pair of powerful cooling units mounted on the waist armor, allowing stable operation in situations that would otherwise be overtaxing; and an additional armored visor on its head equipped with an original image sensor and dedicated enhancer. Although this visor is meant only for protecting the dual camera eyes during close range combat, it can exhibit extremely high precision when used with the R-4 Type Beam Rifle.[1][2]

Thanks to its various improvements, the GM Sniper Custom's performance rivals that of the RX-78-2 Gundam.[1] This proves that even mass production mobile suits can become high-spec machines through fine-tuning.[2] However, due to cost issues, only less than 50 GM Sniper Customs were produced.[1][2] Later, the GM Sniper Custom served as the base unit for two other specialized variants: the RGM-79KC GM Intercept Custom and the RGM-79HC GM Guard Custom.[1][3]

A box-shaped device mounted on the right forearm capable of emitting a beam blade. The beam saber within the box can be taken out and used as a handheld weapon.[2]

Model number: BR-M79-L3[6][7]
A beam rifle designed specifically for the GM Sniper Custom, range and output have been increased, but it has a smaller ammo capacity.[8] When used by the GM Sniper Custom, its effective range greatly exceeds the range of the RX-78-2 Gundam's beam rifle.[2] It shares the same frame structure as the standard beam spray gun.[6] The rifle's barrel, stock, and scope can be folded when not in use.[2]

A double-barreled version of the BR-M-79C-1 Beam Spray Gun. This design suppresses barrel heating by firing alternately from the two barrels.

Mounted on the forearm, this small, light shield is commonly used by the Gundam Ground Type and GM Ground Type. Constructed of Luna Titanium alloy, it is designed to primarily protect the cockpit and other critical areas. Additionally, it can be used as a close-range striking weapon in mobile suit combat. Furthermore, through lodging the spikes at the tip into the ground, the shield can serve as a free-standing frontal defense. This also allows the mobile suit to use both hands to hold large-caliber weaponry and maintain a stable firing position. Only used by Gundam Fix Figuration version.

After the Battle of Solomon, modification of the RGM-79 into the RGM-79SC took place at the newly captured Solomon and Luna II.[12] 24 early production units were produced by Luna II as part of the third production run.[13] In total, less than 50 GM Sniper Customs were constructed due to cost issues.[1] These units often had various customizations applied to them by their pilot.[14] The unit piloted by Lieutenant Francis Backmeyer was said to be the most heavily armed, and roughly half of all units imitated his loadout.[1] Tenneth A. Jung, the Federation's top ace pilot during the One Year War, also piloted a GM Sniper Custom.[15]

The GM Sniper Customs were mostly assigned to escort fleets and defend transport ships in dangerous space sectors. A small number was assigned to special forces units to carry out sabotage and surprise attacks on Zeon forces stationed at each Side. Pleased with the Sniper Custom's performance, the EFSF headquarters ordered the development of an improved version for the attack on the Zeon homeland, which eventually became the RGM-79SP GM Sniper II.[16] Later, a large number of GM Sniper Custom and its variants participated in the Battle of A Baoa Qu,[17] including Francis Backmeyer's unit.[2]

In Mobile Suit Gundam 0083 Rebellion, a GM Sniper Custom belonging to the 404th airborne unit provided sniper support to a team of RGM-79V GM Night Seeker in capturing the stolen RX-78GP02A Gundam "Physalis". It was fixed to an Assault Type Gunperry and destroyed a MS-05L Zaku I Sniper Type defending the Komusai II transporting the Gundam. However, due to dense fog and the destruction of the GM Night Seeker team, it was forced to retreat.

Retrofitted Sniper Custom units were used during the Gryps Conflict and deployed at Jaburo.[11] They were equipped with the same leg suspension system and linear seat as the RMS-179 GM II.[1] 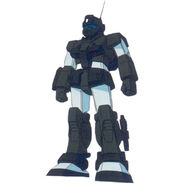 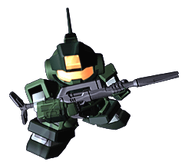 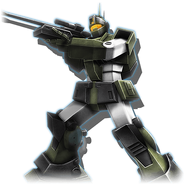 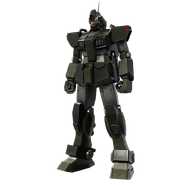 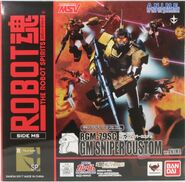 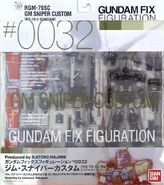 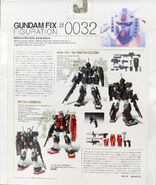